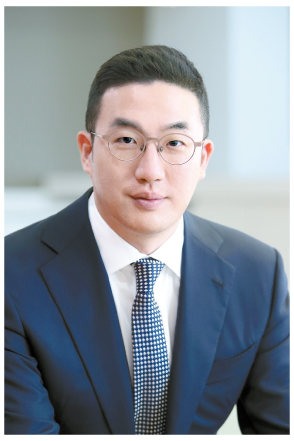 This unexpectedly fast appointment marks the beginning of a power transition within the group to the fourth-generation leadership of the conglomerate. It is the first time that the leadership has passed down to a founder’s great-grandchild among Korea’s top 10 chaebols, including Samsung and Hyundai.

LG said the group will maintain its current governance structure with a holding company that looks over the group-wide business direction and each affiliate managed by professional managers. LG Corp will be run jointly by Koo and Ha Hyun-Hwoi, the vice chairman and chief operating officer.

Koo plans to first focus on fostering future growth engines and investing in talent, according to LG. Industry insiders say Koo will likely start by restructuring the business portfolios within LG. The country’s fourth-largest conglomerate, which is competitive in electronics and chemical businesses, has been eyeing biopharmaceuticals, energy, automotive parts and robot businesses as possible growth engines.

When LG Electronics acquired Austrian automotive lighting supplier ZKW in April for 1.4 trillion won ($1.25 billion), expectations grew that the electronics producer would bank on the automotive component business for growth rather than its smartphone business, which has been showing weak sales.

The company also has room for synergy within its own affiliates. Electronic parts can be manufactured by LG Electronics, while LG Chem makes electric car batteries, LG Innotek makes motors and telecommunication modules for cars and LG Display offers car displays.

LG is also interested in bolstering its robotics business. Last week, LG Electronics announced it has invested $3 million in U.S. service robot maker Bossa Nova Robotics as part of its continued push into robot development. The investment came less than a month after it announced a 20 percent acquisition of Korea’s leading industrial robot company Robostar.

LG has been making its own progress in robotics by launching service robots that can guide passengers or clean up at Incheon International Airport last year.

Koo is expected to press on with further acquisitions or investment in research and development to secure a competitive edge in the latest technologies related to robotics as well as spotlight new technologies like artificial intelligence and the internet of things.

“I will inherit and further develop good business assets accumulated by LG,” the newly appointed Koo said. “If there are areas that call for change, I will make amendments to establish a basis for growth in a long-term business perspective.”

LG described Koo as a “practical” and “flexible” type of leader. The company said Koo was open to discussions with employees and valued cooperation with outside parties during his career at LG. After studying at Rochester Institute of Technology, Koo joined LG Group in 2006 in the financial division of LG Electronics.

Meanwhile, LG Vice Chairman Koo Bon-joon, the younger brother of the late tycoon, is widely expected to leave LG Group in the near future following the conglomerate’s traditions in order to allow his nephew to successfully take control of the group. The vice chairman is expected to take some LG affiliates with him in spin-offs. However, an LG spokesperson said no details have been decided yet as to what affiliates will be split from LG Group.