As the mercury is rising, busy Koreans are finding that air conditioning units and fans in their homes and offices just aren’t enough to help them keep their cool. Enter this summer’s must-have item - the portable fan.

According to e-commerce platform Gmarket, unit sales of battery-powered, handheld fans surpassed all other categories of electric fans, including standing fans in June, at the start of the summer season in Korea.

It is the first time that portable fans have accounted for over half, at 51 percent, of total electric fan sales on the platform. Considering handheld fans only accounted for 26 percent of fan sales in 2015, their popularity has doubled over the past three years.

“The key competitiveness of handheld fans is that they can be used anytime, anywhere,” a spokesperson from eBay Korea, which operates Gmarket, said. “As the fan runs on batteries, it also frees users from the burden of paying high electricity bills.” 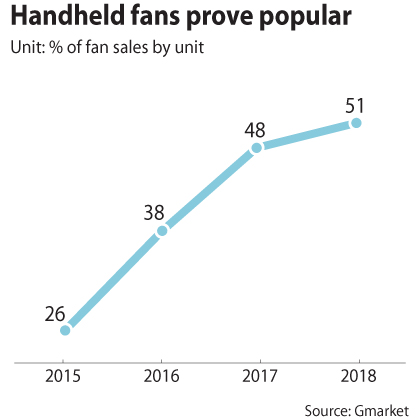 Portable fans aren’t the only innovative products helping consumers keep their cool. For those looking for fans that they can freely move around with at home, a cordless device might just be the answer. Cordless standing fans have become a big hit, riding on the coattails of the huge success of cordless vacuums from renowned companies like Dyson and LG Electronics. 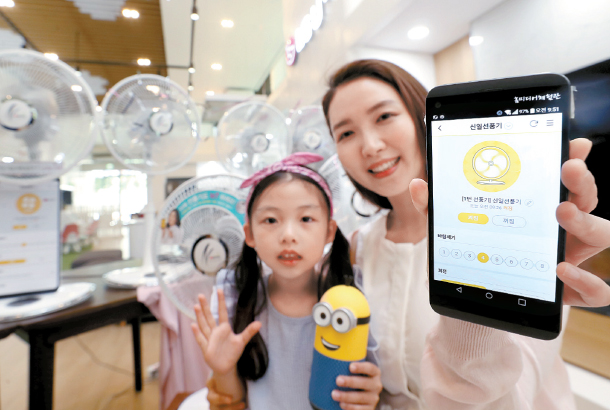 Models from LG U+ hold up a smartphone app that controls an electric fan through Internet of Things technology developed jointly with local fan maker Shinil. [YONHAP]

The growth of the market has been led by two key products: Japanese Balmuda’s GreenFan S, priced at 549,000 won ($493), and the cheaper alternative from Chinese company Xiaomi, the Mijia Floor Fan, priced at 145,000 won.

The more affordable option was one of the top sellers on Gmarket as it offers internet of things (IoT) connectivity as well. The angle, timer and other settings can be controlled via a smartphone app.

To counter the foreign competitors, Emart released its “Loving Home Cordless Fan,” priced at 138,000 won through 100 Emart stores nationwide earlier this month. The fan can be used for as long as seven hours and 30 minutes per charge. The fan comes with a remote controller and offers nine different wind settings.

“Consumer interest on cordless appliances that offer convenience as well as better designs is at its peak,” said Yang Seung-kwan, an appliances merchandiser for Emart. “We will keep expanding our cordless fan lineup next year.”

Shinil also launched a new electric fan last week in partnership with LG U+ that uses IoT technology. Though the fan is not cordless, it can be controlled remotely via voice command or mobile application. It costs 139,000 won.