Pompeo seems headed back to North

Pompeo seems headed back to North 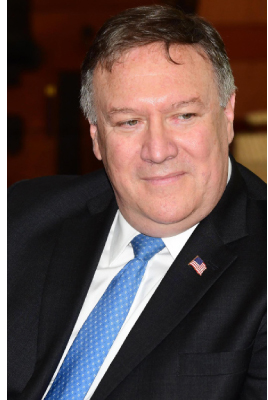 Following reports that U.S. Secretary of State Mike Pompeo will visit Pyongyang next week, the Blue House said Friday that it is “closely observing” the denuclearization negotiations between the United States and North Korea.

If the visit takes place, it would be Pompeo’s third Pyongyang visit and the first senior-level meeting between the two countries since the June 12 summit between U.S. President Donald Trump and North Korean leader Kim Jong-un in Singapore.

The Financial Times reported Thursday that Pompeo will visit the North next week to push the Trump administration’s efforts to force North Korea to denuclearize, citing four people familiar with the secretary’s plans.

Pompeo canceled a planned meeting with his Indian counterpart, External Affairs Minister Sushma Swaraj, set to arrive in Washington on July 6, because of “important travel related to North Korea,” one U.S. official was quoted as telling the paper. Another official said that an official announcement will be made in coming days.

The U.S. State Department said that the so-called two-plus-two defense and foreign affairs talks with India was canceled. Indian Minister Nirmala Sitharaman and Swaraj had been set to travel to Washington to take part in the talks next week with U.S. Defense Minister Jim Mattis and Pompeo next Friday.

Indian Foreign Ministry spokesman Raveesh Kumar said in a statement that Pompeo expressed his regret to Swaraj over the phone Wednesday for having to postpone the dialogue “for unavoidable reasons.”

Kim also remained ambiguous on reports on the possibility of the leaders of the so-called six-party nations - the two Koreas, China, Japan, Russia and the United States - convening at the Russia-hosted Eastern Economic Forum in Vladivostok. South Korean President Moon Jae-in, who returned from a state visit to Russia earlier this month, has been invited to attend the three-day forum which kicks off on Sept. 11.

“Because it is an issue related to the participation of North Korean leader Kim Jong-un, we are not at a stage where we can be making a decision,” said Kim, indicating it is too early to tell on the matter.

South Korean Minister of Foreign Affairs Kang Kyung-wha held a phone call with Pompeo Friday morning on strategic coordination for the complete denuclearization and the establishment of permanent peace on the Korean Peninsula.

In the half-hour phone conversation, the two top diplomats discussed the current situation including follow-up measures to the North-U.S. summit, said the Korean Ministry of Foreign Affairs in a statement.

Pompeo, in turn, was said to have explained “the United States’ plans related to preparations for follow-up North-U.S. negotiations,” and the two top envoys were said to have had “substantive discussions on a concrete strategy for the faithful implementation of the results of the inter-Korean and North-U.S. summits.”

The two diplomats recognized that this is a “very important period,” calling for close Seoul-Washington coordination.

Pompeo visited Seoul on June 14 on the heels of the Singapore summit and briefed Kang and their Japanese counterpart, Taro Kono, on the results of the Trump-Kim negotiations.

There has been interest in whether follow-up negotiations to the June 12 summit could produce a more concrete roadmap and timeline toward North Korea’s denuclearization.

Last Sunday, Pompeo told CNN that he is “not going to put a timeline on” negotiations with North Korea, but that “whether that’s two months, six months, we are committed to moving forward in an expeditious moment to see if we can achieve what both leaders set out to do.” Instead, he said he hopes for an “ongoing process of making progress.”

While the June 12 joint statement signed by Trump and Kim in Singapore has been critiqued by some pundits as not being substantive, it committed to “follow-on negotiations.”

It named Pompeo to lead the U.S. talks and an unnamed “relevant” high-level North Korean official, to hold talks “at the earliest possible date, to implement the outcomes of the U.S.-DPRK summit.” DPRK is the acronym for North Korea’s official name.

Ahead of Pompeo’s reported visit to Pyongyang, the U.S. State Department continued to ramp up pressure on the North over human rights, naming it one of the worst human trafficking nations in an annual report.

The State Department released its “2018 Trafficking in Persons Report” on Thursday which placed North Korea in Tier 3, the lowest classification, calling out the regime for “continued state-sponsored human trafficking through its use of forced labor in prison camps, as part of an established system of political repression.”

“Untold numbers of North Korean citizens are subjected to forced labor overseas by their own government, in many cases with the tacit approval of host governments,” said Pompeo on Thursday in a ceremony to release the report.