PYEONGTAEK, Gyeonggi - The U.S. Forces Korea (USFK) opened their new headquarters in Pyeongtaek, Gyeonggi, on Friday, in a relocation project likely to broaden its security role long defined by deterrence against North Korea.

The USFK held a ceremony to celebrate their relocation from Yongsan District, central Seoul, to Camp Humphreys, a sprawling complex about 70 kilometers (43 miles) south of the capital, after a delay caused by local protests, budget issues and massive construction work to prevent floods.

“Today marks a historic milestone in the history of the United Nations Command (UNC) which began in 1950 and the history of the ROK-U.S. alliance,” Gen. Vincent Brooks, commander of the USFK, said at the ceremony marking the end of an era for Yongsan as both the USFK and UNC headquarters.

“Indeed today, the UNC continues to be the home for the international commitment with the mandate to restore peace and security in the defense of the Republic of Korea,” he said. “The USFK will remain the living proof of the American commitment to the alliance.”

“This headquarters’ building within the complex represents a significant investment in the long-term presence of the U.S. forces in Korea,” he said. “Ladies and gentlemen, this was a project that cost nearly $10.8 billion to build over 10 years. The Republic of Korea’s investment was over 90 percent of the cost, and for that 90 percent, the United States remains with you 100 percent.”

The relocation marked the separation of the USFK and UNC headquarters from the South Korea-U.S. Combined Forces Korea (CFC). 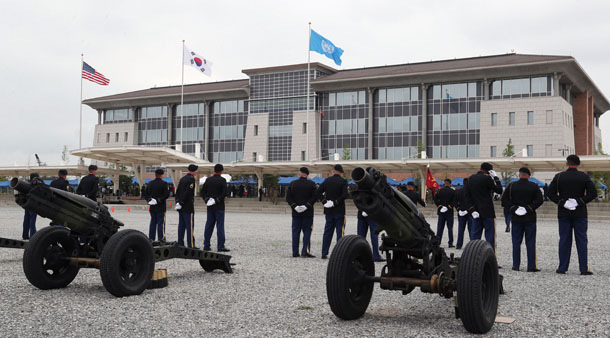 South Korean President Moon Jae-in said that the new headquarters will help ensure the stable stationing of the USFK.

“Through the opening of an era in Pyeongtaek, I hope that the South Korea-U.S. alliance will evolve into a great alliance beyond the military, a comprehensive alliance,” he said in a speech read out loud by his security aide, Lee Sang-chul. “The alliance has been the foundation for peace and stability and paved the way for South Korea’s democratization and economic growth.”

South Korea’s defense minister, Song Young-moo, said that the USFK will embrace a new role in the new military complex.

“The new mission will be an important one to contribute not only to peace on the peninsula,” he said, “but also to world peace as a stabilizer in Northeast Asia.”

The Eighth United States Army, a ground USFK component, already relocated its headquarters to Pyeongtaek in July, while service members of the USFK and UNC are set to move to Pyeongtaek by the end of the year.

The CFC will move to a separate seven-story building inside Seoul’s Ministry of National Defense by the end of the year.

Friday’s ceremony comes amid brisk diplomacy aimed at the North’s denuclearization and the establishment of permanent peace on the peninsula, which analysts said could lead to a reduction - or pullout - of the USFK or a shift in its role and modus operandi.

After all, the South and the United States apparently affirmed through action that their alliance not only targets the North, but also seeks to play a central role on the peninsula, in Northeast Asia and the world.”

The allies agreed to the relocation program in May 2003. The agreement came as Washington was seeking greater strategic flexibility in its USFK operations, in line with its military realignment program, the Global Defense Posture Review.

The $10.8 billion program, funded by Seoul, seeks to consolidate U.S. bases across the peninsula into two garrisons in Pyeongtaek and Daegu. It comprises the Yongsan Relocation Plan and Land Partnership Plan, which call for moving the USFK and UNC headquarters in Seoul and troops north of the capital to Pyeongtaek.

The USFK established its Yongsan headquarters in July 1957 after the end of the 1950-53 Korean War. A large group of U.S. troops first entered the peninsula in September 1945, less than a month after Korea was liberated from 36 years of Japanese colonial rule. Their mission was to disarm Japanese troops south of the 38th parallel, a line drawn by the United States and the then-Soviet Union.

Washington sent its 24th Army Corps to take charge of the southwestern region, the capital area and the southeastern region as part of a U.S. military administration. In November 1945, the number of American troops in Korea topped 70,000.

As part of its postwar military realignment, Washington began curtailing its troops in East Asia, then a region of less strategic significance than Europe. In June 1949, it withdrew all troops in Korea except for some 500 of the U.S. Military Advisory Group.

Subsequently, the 24th Corps was dissolved, the Sixth Army was disassembled and the Eighth Army was scaled back. As a result, only the Eighth Army, Fifth Air Force and Seventh Fleet - all under the U.S. Far East Command - were left in East Asia.

Following the North’s invasion on June 25, 1950, American troops returned to the peninsula to defend the South under a UN mandate. During the Korean War, the United States dispatched more than 320,000 troops to the South.

Currently, the U.S. military maintains about 28,500 troops on the peninsula, but the number of troops can drop below that or swell to over 30,000 due to the presence of rotational units and training exercises.