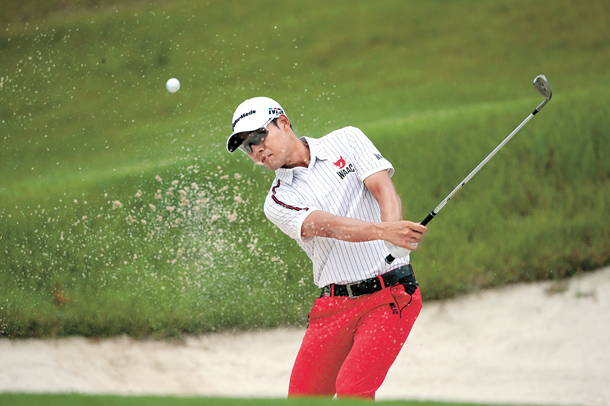 Mun Do-yeob watches his bunker shot during the final round of the 61st KPGA Championship at A-One Country Club in Yangsan, South Gyeongsang, on Sunday. [NEWS1]

Kim Bong-sub had the sole lead until the par-3 17th, but he finished with a double bogey on the last hole, extending the tournament into a sudden death between Mun and Han.

In the first playoff hole, the odds seemed to favor Han. Mun missed his tee shot into the rough and left himself a downhill putt for a birdie. Han left himself a shorter uphill putt.

But once Han’s uphill birdie putt leaped out, Mun was given one more chance at winning the tournament.

In the second playoff hole, even before getting to the green, Mun was the heavy favorite after Han hit his tee shot into the hazard. His fourth shot hit the green. Meanwhile, Mun stuck his second shot 2 feet from the flag.

With Han two-putting for a double bogey and Mun tapping in for a birdie, Mun secured his first KPGA title.

“I feel like I’m dreaming,” Mun said after the round. “A lot of my close friends have been winning tournaments this season. Watching them, I told myself that I could do it, too.”

The 26-year-old made his KPGA debut in 2013 and has been an unknown on the KPGA Tour over the last six years. Up until Sunday, he had two runner-up finishes but never won a tournament. In Mun’s first three seasons, he was sent back to the qualifying school twice at the end to regain his full-time status.

“I want to thank my parents for supporting me and waiting for me all this time,” Mun said.

The now proud golfer took home prize money of 200 million won ($180,000) and will maintain his full-time status on the KPGA Tour until the 2023 season. The win also allows him to compete at a PGA Tour event, the CJ Cup, in October and get a lifetime exemption to compete at the KPGA Championship.

Aside from Mun, Choi Youn-soo received by far the most attention during the first two rounds of the tournament. At 69, he was the oldest golfer ever to compete in the KPGA Championship.

“Since it’s hard to compete against younger golfers, I’ve been missing the event in the past,” Choi said, “but I competed last year because it was the 60th year of the tournament, and this year, I decided to compete to celebrate my 70th year [in Korean age]. I think this year will be my last time competing.”

Choi, who made his KPGA Tour debut in 1977, is no longer a full-time member of the tour. However, he was still able to compete since every winner of the tournament is given a lifetime exemption. Throughout Choi’s career on the KPGA Tour, he won the event three times.

“It feels like yesterday when I passed the qualifying school in the summer of 1977, but it’s already been 40 years,” Choi said. “I’ve been taking care of my physical condition, and I’ll continue to play in the senior tour.”

Choi missed the cut after the first two rounds, finishing last with 19 over par.

Choi Min-chul, who set a course record during the first round at nine under par, finished the tournament tied for 34th at four under par. He had just come off winning the Korea Open the previous weekend.

The KPGA Tour continues at the NS HomeShopping Gunsan CC Jeonbuk Open from July 5 to 8 at the Gunsan Country Club in North Jeolla.