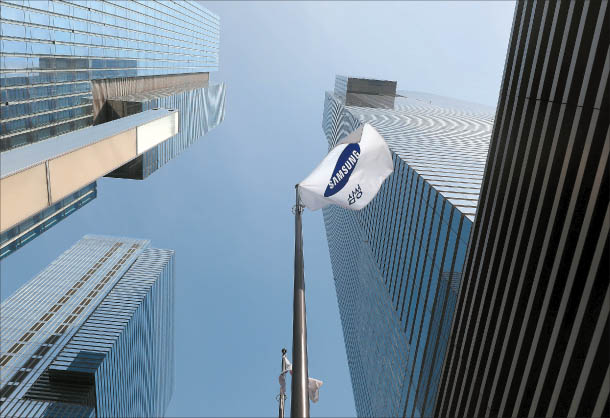 For Samsung, the landslide victory by the ruling Democratic Party (DP) in the June 13 local election means that the clock is ticking on its corporate structure overhaul.

The DP’s win has widened the gap with the main opposition Liberty Korea Party at the National Assembly, adding momentum to President Moon Jae-in’s crusade against chaebol governance systems.

A series of laws and regulations aimed at dissolving cross-holdings between Samsung affiliates will soon be processed by the National Assembly and the financial regulator, prompting the country’s largest conglomerate to give serious thought to how it will proceed with a leadership transition under the evolving regulatory framework.

At the top of the structure sits Samsung C&T, whose top shareholder is the younger Lee. The construction and retail unit then holds a 19.3 percent stake in Samsung Life Insurance, which in turn owns a 7.9 percent share in Samsung Electronics.

Analysts believe that Samsung will attempt to shift the majority of the 7.9 percent stake to Samsung C&T to avoid regulatory risk and maintain Lee Jae-yong’s control over the corporate giant. 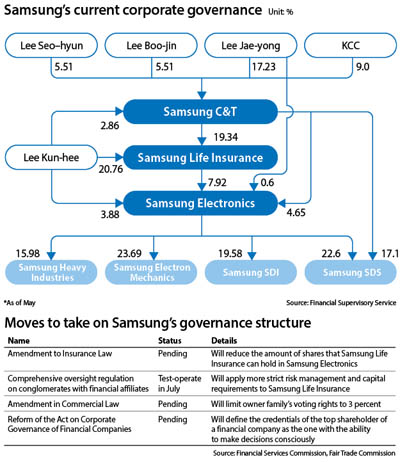 A bill that poses a major challenge to the current structure is a proposed amendment to the insurance law, which could force Samsung Life Insurance to sell the vast majority of its shares in Samsung Electronics.

Currently, an insurance company is only permitted to invest a maximum of 3 percent of its assets in an affiliate, based on the acquisition cost. The reform, proposed by Rep. Lee Jong-kul of the Democratic Party, will change the price standard from the acquisition cost to the current market price, a system currently used for banking and securities companies.

Samsung Life Insurance’s holding in Samsung Electronics is permitted under the current law because it cost around 569 billion won at the time of acquisition, less than 3 percent of the company’s net assets.

But when the holding is converted to the current market value, it balloons to 23.7 trillion won ($21.3 billion) as of Friday’s closing price, which goes well past the 3 percent limit set at 8.5 trillion won.

When the pending bill passes, the insurance unit will be forced to sell more than 15 trillion won worth of shares.

The Democratic Party now controls 130 of 300 seats in the National Assembly. Assuming that the ruling party can count on the support of other left leaning minor parties and independents, the share increases to 157, more than the majority needed to pass the legislation.

The floor leader of the governing party has already raised the need to form an alliance with other liberal parties in the legislation.

The heads of the financial authorities have publicly pressed the life insurer to voluntarily take action before the amendment is passed.

Kim Sang-jo, head of the Fair Trade Commission, presented a similar view in May.

“The current structure is not sustainable,” he said, “There are different options, but above all, Lee Jae-yong should be the one who makes a decision.”

In an apparent response to the demand, Samsung Life Insurance sold 1.12 trillion won worth or 0.38 percent of its shares in Samsung Electronics on June 1.

“Samsung Life Insurance decided to sell the shares to avoid the regulatory risks,” said a source at the company.

Analysts see the move as a prelude to the shift in Samsung’s governance structure.

“It appears that Samsung is set to carry out the change in corporate governance,” said Eun Kyung-wan, an analyst at Meritz Securities.

Others see that C&T has already set out to secure cash for the potential sale of Samsung Electronics.

Ahn Sang-hyun, director of the corporate governance research division at Daishin Economic Research Institute, cited the recent sale of the Samsung C&T Building as a move linked with the governance restructuring process.

“It is too early to suggest specific scenarios,” Ahn said. “But the direction will be aimed at increasing Lee’s control over key affiliates - Samsung Electronics, Samsung C&T and Samsung Life Insurance.”

“The group will likely put Samsung C&T at the center, because financial units like Samsung Life Insurance are entangled in stricter regulations. Samsung C&T’s decision to sell the building in Seocho is also in line with that direction.”

The construction arm put the office building on sale in February, attracting around 10 bidders.

Besides the office building, Samsung C&T is also on track to sell its stake in Hanwha General Chemical.

“Samsung C&T appears to be in the process of obtaining more cash-based assets in order to acquire more shares in Samsung Electronics,” said Cho Yong-sun, an analyst at HMC Investment Securities.

“It had sold its shares in Cheil Worldwide to Samsung Electronics and is in talks to sell a 20 percent stake in Hanwha General Chemical [worth 1 trillion won] on top of the sale of the Seocho building.”

Still, market insiders agree that the endeavor falls short of meeting the amount of money needed to buy the bulk of Samsung Electronics shares, worth over 10 trillion won.

“Samsung C&T may need to do more to increase its shares because the current level is not enough,” said an analyst who requested anonymity.

But the analyst added that that scenario comes with its own issues because Samsung BioLogics is under inspection over accounting practice.

Stronger oversight on the horizon

The reform of the insurance law is just one of a string of regulations taking aim at Samsung.

The Financial Services Commission is about to trial the implementation of a tougher oversight system on conglomerates with financial affiliates.

When the policy comes into effect, Samsung Life Insurance will need to comply with the capital requirements and risk management rules required for financial holding units.

Currently, each financial affiliate is independently subject to financial requirements concerning debt and capital reserves, but the authorities have raised the need to comprehensively manage risks as a group.

An amendment to the Commercial Law could deal a blow to other conglomerates as well as Samsung, because it will extend voting rights by minority shareholders through cumulative voting.

Cumulative voting refers to a system of voting in an election in which each voter is allowed as many votes as there are candidates and may give all their votes to one candidate or spread them among several.

The new system is a departure from the current one share, one vote approach.

Still, some express fear that the change could be exploited by foreign activist funds.

Groups representing public companies in Korea have already called for measures to prevent hostile takeovers or assertive actions by activist hedge funds in the midst of an intensifying battle between U.S. hedge fund Elliott Management and Hyundai Motor.

Rep. Park Sun-sook of the minor opposition Bareunmirae Party proposed a reform to the Act on Corporate Governance of Financial Companies to discredit top shareholders who can’t make conscious decision. The proposal will define the credentials of the top shareholder of a financial company as the one with the ability to make decisions consciously.

That could come as a particularly harsh blow to Samsung because the top shareholder of Samsung Life Insurance is the elder Lee who has been bedridden since he suffered a stroke in May 2014.