From rice paddies to research paradise

From rice paddies to research paradise

Magok-dong, an area nestled just east of Gimpo International Airport in Gangseo District, western Seoul, was home to Seoul’s last rice paddies in the early 2000s. Today, it’s touted as Korea’s Silicon Valley with tens of thousands of the country’s brightest scientists and researchers working in the area every day.

The so-called M Valley now houses some of Korea’s most renowned companies and research firms. It follows in the footsteps of Teheran-ro in Gangnam District, southern Seuol, and Pangyo-dong in Seongnam, Gyeonggi, as a rising R&D hub, but surpasses both in size, spanning 366.5 hectares (905.6 acres).

Kolon - a conglomerate with businesses in various fields including technology and clothing - opened its Future Research Park in April as well, with 1,000 employees from three of its affiliates working at the new facility. Lotte Group also moved its R&D center from Yeongdeungpo District, western Seoul, to M Valley, expanding it five times in the process.

According to the Seoul Metropolitan Government, a total of 136 companies - 46 conglomerates and 90 small and mid-size enterprises (SMEs)- have confirmed that they will open offices or have already moved into M Valley. The city government oversees the development of the Future City MAGOK, M Valley’s official English name.

The city government is also building facilities to help grow start-ups and SMEs. By 2022, the Seoul government plans to complete the construction of a support center providing legal and marketing services for companies moving into Magok, as well as government-subsidized apartments to provide low-cost accommodation for start-up founders.

“If talented individuals from various companies and research centers gather in one place,” said Han Sung-soo, chairman of Kolon’s Future Research Park, “it will bring about a virtuous cycle of entrepreneurship, investments and mergers and acquisitions.” 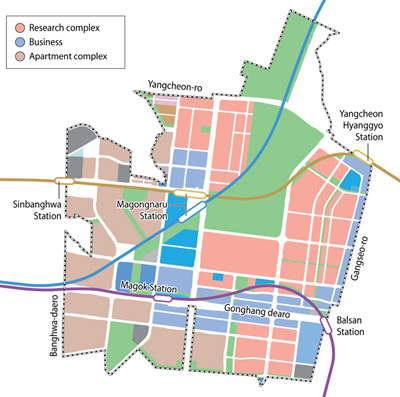 M Valley is highly accessible via public transport, as metro lines No. 5 and 9 and the Incheon Airport Railroad all pass through the district. Gimpo International Airport is also just two stops away on line No. 5, and the Olympic Highway, which extends all the way east to Gangnam District, also runs through the valley.

Situated just across the Han River is Digital Media City, Seoul’s broadcast and media technology hub. Korea’s largest exhibition center Kintex at Goyang, Gyeonggi, is only a 30-minute drive away, and Yeouido, the financial hub of Seoul, is only a little over 10 kilometers (6.2 miles) away.

Another feature that adds to Magok’s appeal is the planned opening of the Seoul Botanical Garden in the valley this October. The Seoul government is now putting the finishing touches to the 50.3-hectare park, which will contain 5,000 different kinds of plants as well as an artificial lake. The garden will be twice as large as Yeouido Park in western Seoul.

The idea to transform Seoul’s last rice paddies into an R&D hub was first raised in December 2005 by former President Lee Myung-bak who was then serving as Seoul mayor.

At the time, the city government tried to attract prestigious domestic and foreign research firms and universities to Magok. Despite Lee’s wishes, only a handful of foreign companies, like Japan’s Toray, confirmed that they would move into the district.

Lee’s immediate successor Oh Se-hoon - also from the conservative party - further expanded on Lee’s dreams and proposed a “Han River renaissance” plan in 2007, creating a 98-acre artificial lake in Magok out of water drawn from the Han. He planned to line up research centers, convention centers and hotels around the lake.

The construction of the M Valley began in September 2009. But as the global financial crisis of 2008 stirred economic unrest in Korea, Oh had to scrap his plan for a giant lake as residents protested amid concerns over the wisdom of using tax money to finance such extravagant projects. Instead, he settled for a more modest 49-acre lake and a park. The Seoul government also offered companies cheap real estate and tax benefits.

In 2012, the Seoul government succeeded in persuading LG to commit to building its R&D center in M Valley. Unlike Samsung or Hyundai, which already had many of their research centers concentrated in Gyeonggi, LG had its R&D offices scattered across Seoul.

Though incumbent Democratic Party Mayor Park Won-soon’s political ideologies may have differed from his two immediate predecessors when he took office in 2011, he continued to push forward with the Magok R&D project and came up with the idea of the Seoul Botanical Garden. During his successful bid for a third term in the provincial elections last month, Park reaffirmed his determination to develop the M Valley with promises to nurture SMEs and new businesses there.

“Lee Myung-bak sowed the first seeds of Magok’s R&D hub and passed it onto Oh Se-hoon,” said Shin Chang-ho, a professor of urban planning and design at the University of Seoul. “Park Won-soon is now making the flower grow. Like the M Valley, R&D that promotes the economy should move forward without stumbling over politics.”