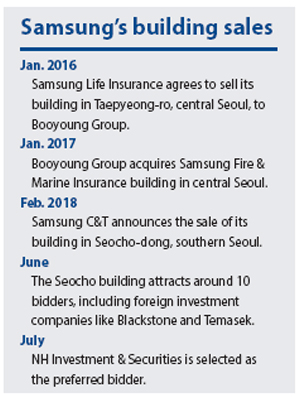 NH Investment & Securities is set to own one of the country’s most expensive buildings, as NH Financial Group’s brokerage affiliate won the right to buy Samsung C&T’s office building in Seocho-dong, southern Seoul.

A consortium led by NH Investment & Securities and Koramco REITs Management & Trust was chosen as the preferred bidder, according to industry and real estate sources on Friday.

Built in 2007, the 32-story office building is one of three symbolic buildings owned by Samsung affiliates in the posh Gangnam area. The other two buildings are used by Samsung Life Insurance and Samsung Electronics.

Real estate insiders expect that the sale will set a record as the most expensive building ever sold in Korea. It is expected to go for around 700 billion won ($628 million). Savills Korea, the sale’s deal broker, said that the building’s book value, which combines the price of the land and construction, stood at 554.8 billion won.

The sale is the latest in a series of mega-deals by Samsung units, a move that some analysts say is aimed at securing cash assets to avoid regulatory risks.

Booyoung Group, a mid-sized construction company, used to be the primary buyer of Samsung buildings, since it was focusing on large office rentals.

Back in 2016, Samsung Life Insurance agreed to sell its building on Taepyeong-ro in central Seoul to the construction company for 575 billion won.

But now, the construction company is scaling back its buying spree due to mounting operating losses. The group announced earlier this year that it will sell the Samsung Fire & Marine Insurance building.

Aside from the company’s losses, real estate analysts see that a high vacancy rate at the building, estimated at around 70 percent, played into the decision.

The high vacancy problem is also shared by other large office buildings in prime locations because of their exorbitant rent prices.