Respect for ‘paintings of the people’ : Gallery Hyundai, Seoul Arts Center put together a major exhibit of minhwa

Respect for ‘paintings of the people’ : Gallery Hyundai, Seoul Arts Center put together a major exhibit of minhwa 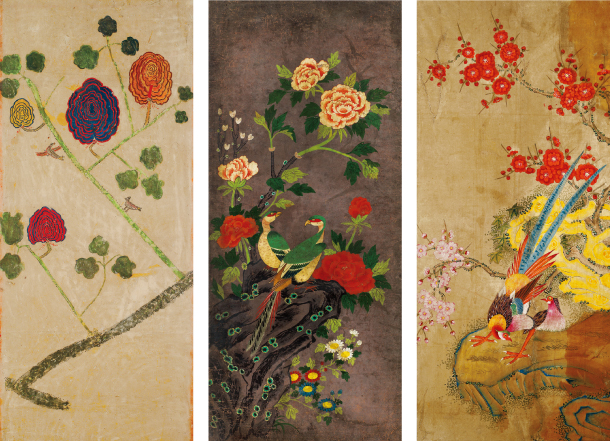 All titled “Flowers and Birds,” these high quality Korean traditional folk paintings, known as minhwa, are on display at the Gallery Hyundai in central Seoul. They are by nameless painters of the Joseon Dynasty and mostly owned by individual collectors. [GALLERY HYUNDAI]

“Flower Paintings from the Joseon Dynasty” is a new exhibition at the Gallery Hyundai in central Seoul that sheds new light on minhwa, often called traditional Korean folk art in English. It will be a big exhibition using all three spaces including Gallery Hyundai, Hyundai Hwarang and the Dugahun Gallery. Why is a gallery best known as a major modern art pathfinder exhibiting antique Korean paintings?

“Whenever I take Korea’s modern art abroad, I always get asked the source of Korean abstract paintings,” said Do Hyung-teh, CEO of Gallery Hyundai. “I found that answer in minhwa.”

The gallery’s founder Park Myung-ja said she encountered numerous folk paintings, some used as lucky charms, after she opened a gallery called Hyundai Hwarang (which is now Hyundai Gallery) in Insa-dong in 1970.

Folk paintings in Korea haven’t gotten much respect as they are works of nameless painters, often peasants, and low in quality. Park had held that stereotype at first, but when she saw some examples of high quality, she began to call these nameless painters “geniuses” and decided to prepare a grand exhibition to shed new light on the genre. Prior to the opening, the Korea JoongAng Daily got a look at the exhibition.

It is Gallery Hyundai’s second exhibition co-hosted with the Seoul Arts Center. In 2016, the gallery and the art center teamed up for a folk painting exhibition showcasing chaekgeori, or drawings of books and study rooms at the Seoul Arts Center’s Calligraphy Art Museum. The exhibition got such a great response that it was extended and even went on tour to the United States, including the Cleveland Museum of Art in Ohio last year.

From left: “Flowers” that reveals repeated patterns; a very modern style of “Peonies” and the fourth-panel of an eight-panel “Painting of Pleasure.” [GALLERY HYUNDAI]

One of the interesting aspects of the minhwa exhibition is the abstract-looking pattern of flowers in paintings from the Joseon Dynasty (1392-1910). Four paintings of “Flowers” displayed in Gallery Hyundai, for example, show a repeated use of flower patterns, as if they were the works of the famous textile designer William Morris.

“This is a discovered concept,” said Chung Byung-mo, professor in the department of Cultural Assets at Gyeongju University, one of the co-curators of the exhibition. “I’ve been researching minhwa for many years and it’s the first time we’ve witnessed such repeating patterns.”

“Unlike royal paintings or muninhwa (scholar’s ink paintings), minhwa flower paintings have a base in the artists’ free-spirited imagination,” said Chung. “It is truly creative and modern.”

Gallery Hyundai believes “the source, or the root of Korean modern artworks lies in such high-quality minhwa.” To show this to the world, the gallery will be participating in the Master’s Section of the upcoming Frieze Masters art fair which runs from Oct. 4 to 7 in London. 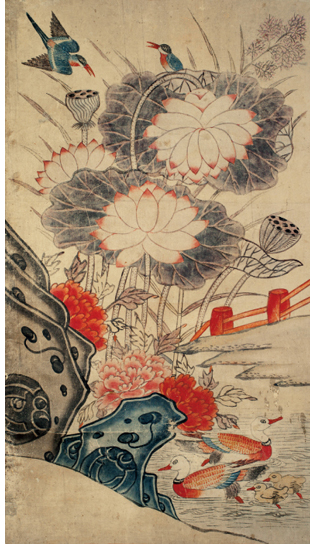 According to Do, minhwa paintings will be exhibited next to abstract paintings by renowned artists including Kim Whanki, Lee Ufan, Chung Sang-hwa and Rhee Seund-ja, to show that the root of Korean abstract art lies in exceptional folk paintings.

In fact, the word minhwa was first created by Muneyoshi Yanagi (1889-1961), a Japanese philosopher and founder of the mingei (folk craft) movement in Japan in the late 1920s and 30s. Although he’s been in the center of controversy for saying that Korean traditional art had a “beauty of sorrow” as the country has long suffered indignities at the hands of foreign countries including Japan, it is undeniable that he had an affection for Korean art. Two of his previously owned folk paintings (now owned by the Japanese Folk Crafts Museum, which he established in 1936) are also displayed at the exhibit.

Most of the works on display are owned by individual collectors, so many will be exhibited for the first time in public.

“Individual collectors who have a discerning eye for artistic works have collected and preserved high quality Korean traditional art works,” Professor Chung said, “as folk paintings were neglected by the public institutions back then.”

“Minhwa definitely is a painting that makes people happy,” said Chung. “Even though they were created during the difficult times of Japanese colonization, there’s no sign of sorrow in such folk paintings and only positive energy can be witnessed. That’s the spirit of Korean people in these ‘paintings of the people.’”

Professor Kho Youen-hee of East Asian Studies at Sungkyunkwan University, who co-curated the exhibition with Professor Chung, said that because of the word “minhwa,” many Koreans misunderstood it as an art of the peasants.

“Yanagi, who created the term, translated it from the English phrase ‘art of the people’ but when the word minhwa was retranslated into English, it became “folk art,” she said. “There are records that many royal painters painted minhwa and sold it to rich families in the Joseon dynasty. The paintings then were replicated by nameless painters and that’s how the ‘minhwa’ was created.”