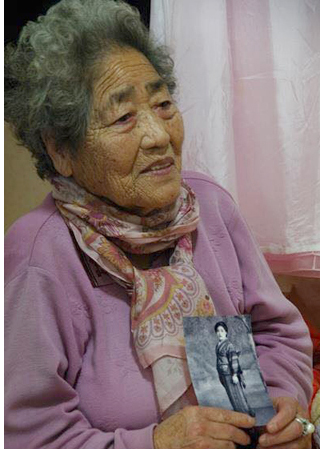 Kim Bok-deuk, a survivor of the Japanese military’s sexual slavery during World War II, died on Sunday. She was 100.

Her death has reduced the number of registered “comfort women,” a euphemistic term that the Japanese military used, to 27 in Korea. Five Korean survivors have died so far this year.

The Korean Council for the Women Drafted for Military Sexual Slavery by Japan, which represents victims, said Kim passed away at around 4 a.m. on Sunday in Tongyeong, South Gyeongsang. Yoon Mee-hyang, a representative of the council, said Kim “battled through her days in the hospital with strong will” and even celebrated her 100th birthday in January, but her health quickly deteriorated before she passed away on Sunday.

According to Yoon, Kim lost her father at age 12. When she was 22, she went to the Philippines on the pretense that she would get a factory job there. Instead, she was forced to provide sexual services to the Japanese military.

After seven years abroad, Kim returned to Korea, where she actively spoke out against the Japanese military’s war crimes.

In 2017, allegations surfaced that Kim’s family received 100 million won ($90,000) without her knowledge from the Reconciliation and Healing Foundation, which was established after the Korean government made a controversial deal with Japan to settle the issue in 2015.

Kim said she did not know about the compensation or check her bank account, but the foundation said it sent the money because Kim and her relatives had consented. Kim had repeatedly expressed her desire to return the money.