The names of the 24 players selected to play in this year’s KBO All-Star game were announced on Monday. 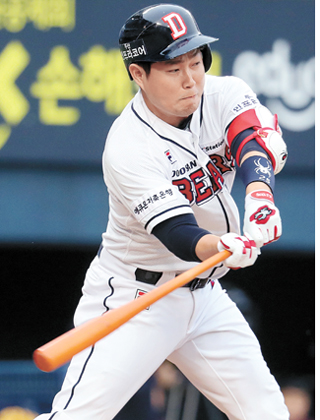 Yang Eui-ji of the Doosan Bears swings during a game against the Nexen Heroes at Jamsil Baseball Stadium in southern Seoul on June 19. [YONHAP]

The players - 12 for each team - were selected based on voting from fans, players, coaches and managers. The voting was weighed so that the opinion of the fans took precedent, worth 70 percent, with the professionals accounting for the remaining 30 percent. An additional 12 players will be added to complete each roster at the discretion of the All-Star managers - the Doosan Bears’ Kim Tae-hyung will lead the Dream All-Stars, while the Kia Tigers’ Kim Ki-tai will head the Nanum All-Stars.

Based on the results of the popular vote, the Dream All-Stars might as well be called Doosan-lite. Nine of the 12 players named to the Dream team came from the Bears, with catcher Yang Eui-ji the overall winner in votes. Yang, the league’s leader in batting average, got 484,185 votes from fans and 213 from players, coaches and managers.

The Bears will be joined by Lee Dae-ho and Son Ah-seop of the Lotte Giants and Choi Jeong of the SK Wyverns. Lee will play for the All-Star team for the ninth time.

The Hanwha Eagles led the fan vote for the Nanum All-Stars but fell behind when it came to player voting, adding four players to the roster. The LG Twins lead the Nanum pack, with half the team - Henry Sosa, You Gang-nam, Oh Ji-hwan, Lee Hyung-jong, Kim Hyun-soo and Park Yon-taik - made up of LG players. Jung Woo-ran, Seo Kyun, Song Kwang-min and Jared Hoying of the Eagles bring the tally up to ten, and the Nexen Heroes’ Park Byung-ho and Kia Tigers’ An Chi-hong round off the lineup.

Tickets for the All-Star game will be available on Interpark from 2 p.m. today.