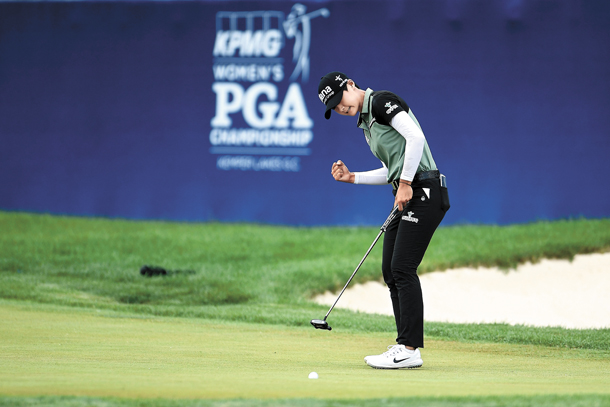 Park Sung-hyun makes a birdie putt during the final round of the KPMG Women’s PGA Championship at Kemper Lakes Golf Course in Kildeer, Illinois, on Sunday. [YONHAP] 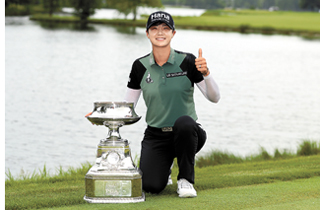 Park Sung-hyun poses with a trophy after winning the KPMG Women’s PGA Championship on Sunday. [YONHAP]

Park, who started the final round four shots behind leader Ryu, made three birdies for a bogey-free round of three under par, 69, on the last day to tie for the lead with Ryu and Japan’s Nasa Hataoka at 10 under par.

During the final round, Park had a big save on the par-4 16th hole after she hit her second shot into the water hazard. Though her ball landed inside the hazard line, Park hit the perfect shot from the hazard to make an up-and-down for a par.

Up until the par-3 17th, it looked like Ryu was going to win the tournament, as she held a two-shot lead. But once Ryu made a double bogey on the 17th hole by hitting her tee shot into the hazard, she allowed Park and Hataoka to share the lead, forcing a sudden-death playoff. Hataoka, who won the Walmart NW Arkansas Championship Presented by P&G prior to the KMPG tournament last weekend, had an impressive final round, shooting eight under par, 64.

However, Hataoka was the first to drop out of the playoff, though she made par. Ryu missed the green in her second shot, but made her birdie putt from the fringe. Park made a 3-meter (9.8-foot) birdie putt to extend the playoff.

“This win means a lot to me, since it made me go one step forward,” Park said. “I think I’ve been waiting this time for such a long time, since I’ve been having a tough year this year especially, and this is my second major win in two years. I can’t still believe what I’ve done, but I’m really happy.”

Prior to the tournament this weekend, Park changed her putter. Park’s putter used to be 34 inches long, but she shortened it to 33 inches.

She also worked on stabilizing her putting by changing her routine on the green. The changes were effective for Park, as she had 27 putts in the final round and not a single bogey.

This is Park’s second win of the season, after the Volunteers of America LPGA Texas Classic in May. With the win, she took home total prize money of $547,500. When considering that 2018 is only Park’s second season as a full-time member of the LPGA, her win was even more impressive. This was her second major title and fourth career LPGA Tour win.

“It was a really long round today, and I can’t still believe that I’m sitting right next to this trophy,” Park said.

Park, who made her LPGA Tour debut in 2017, had a successful rookie season, winning three titles - rookie of the year, player of the year and the money title. She also won two tournaments, including a major tournament, and briefly took the No. 1 spot in the Rolex World Rankings in November, becoming the first rookie to do so since the ranking system was first introduced in 2006.

Despite her successful debut last season, Park has had an inconsistent second season on the Tour.

Though Park won a tournament in May, Park has missed the cuts in three out the five tournaments since then. As it’s been a rough season for Park, she was very emotional after her win.

“Actually, this is my first time feeling this kind of emotion, like being this emotional, and I was really happy,” Park said.