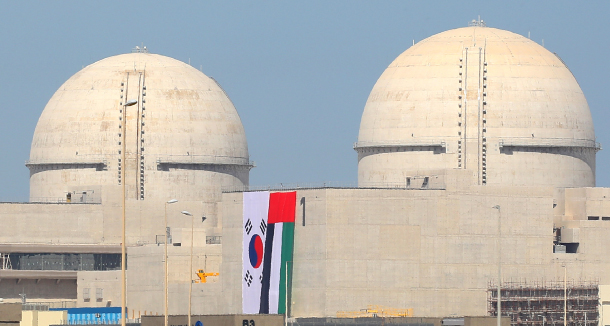 The first and second Barakah nuclear power plants, built in the United Arab Emirates by Kepco. The first, right, was completed in March. Korea was picked on Monday as a preferred bidder for Saudi Arabia’s first nuclear project. [YONHAP]

According to the Ministry of Trade, Industry and Energy on Sunday, the Korea Electric Power Corporation (Kepco), a state-run energy company, was shortlisted by the King Abdullah City for Atomic and Renewable Energy to bid to build two nuclear reactors capable of generating 2.8 gigawatts in total by 2030 in Saudi Arabia. Other candidates are the United States, France, Russia and China.

Following the announcement, the government held a meeting on Monday, presided over by Paik Un-gyu, the minister of trade, industry and energy, to discuss how it could help the utility company land the project.

“We expect fierce competition in the bidding process with all the tenders picked as preferred bidders instead of three as we previously anticipated,” said Paik during the meeting. “We believe this is part of Saudi Arabia’s strategy to maximize its leverage in the deal … we must closely monitor the situation and respond cautiously.”

The Energy Ministry also opened a support center at Kepco’s office in Seoul to oversee the bidding process.

Paik added that the government will provide “full support” to help Kepco win what is expected to be a multibillion-dollar deal.

If Kepco is picked as the final bidder, it would be the second time that Korea has exported its nuclear reactor technology to the Middle East.

In 2009, Kepco won a lucrative deal worth some $20 billion to build the Barakah nuclear power plant in the United Arab Emirates, the country’s first nuclear power station. The construction of the first reactor was completed earlier this year.

The government considers the Saudi project to be a crucial milestone in Korea’s attempt to become a major nuclear exporter.

Paik said in Monday’s meeting that landing the deal would create “important momentum” for the country’s nuclear exports.

Kepco also became the preferred bidder to take over the NuGeneration consortium from Japan’s Toshiba and complete the construction of the Moorside nuclear power plant in the United Kingdom.

Kepco and its nuclear-operating subsidiary Korea Hydro & Nuclear Power are counting on exporting nuclear reactors abroad to maintain their profitability as the Moon Jae-in administration continues its effort to scale down the country’s reliance on nuclear energy to satiate domestic energy demand.

The winner of the Saudi Arabian project will be announced next year, according to an official from the Trade Ministry.