The conscience of a pacifist

The conscience of a pacifist

LEE HYUN-SANG
*The author is an editorial writer at the JoongAng Ilbo. 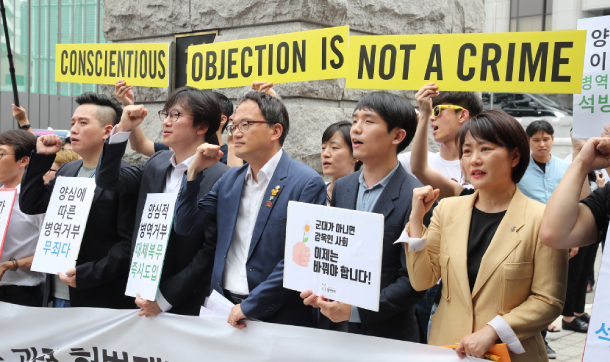 A liberal group rallies outside the Constitutional Court in central Seoul on Thursday in support of conscientious objectors to Korea’s military conscription. [YONHAP]

For as long as there has been war, there have been those who refuse to fight. The first recorded conscientious objector is Maximilian of Tebessa. The son of a Roman soldier, he was obliged to serve in the army, and when he refused, he was beheaded. Later, he was canonized as a Christian saint.

Countries with a tradition of Christianity are generous toward conscientious objectors. In 16th-century Netherlands, believers of certain sects were allowed to pay a tax instead of serve in the military. In 18th-century England, Quakers were exempt from conscription. In the United States, Seventh-day Adventists served as non-combatants during the Civil War.

A restorationist denomination with beliefs distinct from mainstream Christianity, Jehovah’s Witnesses emerged from a small Bible study group in Pennsylvania in the 1870s. They believe they must accept the Bible literally, aside from clear comparisons and symbolism. Their grounds for rejecting blood transfusions and military service are Acts 15:29, “you abstain from … blood,” and Isaiah 2:4, “nation shall not lift up sword against nation.”

Recently, Korea’s Constitutional Court ruled that the government should provide alternative options to conscientious objectors. Controversy immediately ensued over how to define “conscientious.” Some question why following the beliefs of a certain religion counts as being “conscientious.”

The discontent stems from the gap between legal and everyday language. Legally, “‘conscience” is the right not to act against one’s beliefs. However, the public considers “‘conscience” with positive connotation, as a guide to right and wrong.

The literal Korean translation of “conscientious objector” subtly changes the phrase’s nuance. Therefore, some argue for a more neutral term than “conscientious.” Alternatives might be “following conviction or belief.” The Military Manpower Administration itself uses “refusal of military enlistment and exercise.”

Some people object to the word “conscientious” because conscience is used too easily nowadays to describe any personal values that are mere beliefs and hard for others to understand. But really, the “conscience” comes from the Latin word conscientia, meaning “joint knowledge of something.”