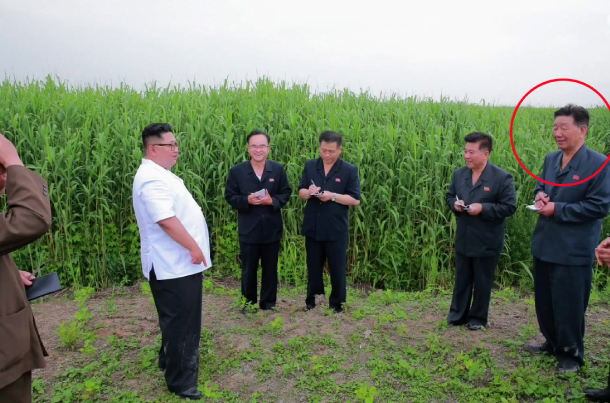 Footage from the North’s Korean Central Television on Saturday shows Hwang Pyong-so, a high-ranking North Korean official, circled, accompanying Kim Jong-un on a trip. South Korea’s spy agency believed he was fired from his post for “impure attitudes” toward the leader. [YONHAP]

A high-ranking North Korean official whom South Korea’s spy agency believed was fired from his post for “impure attitudes” toward leader Kim Jong-un has been rechristened as a “senior official” in the Workers’ Party’s Central Committee.

North Korean state media referred to Hwang Pyong-so on Saturday for the first time since October. Although his rank was not specified, Hwang, who once led the North Korean Army’s General Political Bureau, was named before Han Kwang-sang, a director-level official in the Central Committee, suggesting Hwang’s rank is somewhere higher.

It was a clear sign Hwang was reinstated to Kim’s powerful inner circle. The North’s media usually names officials in order of rank. Hwang reappeared in North Korean media in February after disappearing in October, but he was not referred to by name.

South Korean analysts speculate Kim is trying to solidify his grip over the country by firing top aides and then reinstating them several months later to make sure they don’t attempt to steal his ultimate authority.

The North’s Korean Central News Agency reported on Saturday that Hwang was among several senior officials in the Central Committee who recently accompanied Kim to Sindo County in North Pyongan Province near the Chinese border.

The state news agency did not give a date for their visits, but North Korean media usually reports on the leader’s activities a day later due to security reasons, meaning the tours, so-called field guidances, likely occurred last Friday.

The fate of Hwang had been a mystery for months. South Korea’s National Intelligence Service said last October that he and his deputy at the North Korean Army’s General Political Bureau, Kim Won-hong, were disciplined during a probe led by Choe Ryong-hae, vice chairman of the Central Committee of the Workers’ Party, for holding “impure attitudes” toward Kim Jong-un.

South Korean officials said at the time that Kim Jong-un was trying to crack down on overly powerful agencies, a tactic that goes back to 2013, when the young leader executed his own uncle and political mentor, Jang Song-thaek, by having the State Security Ministry interrogate him and find him guilty of trying to overthrow the government.

The South Korean agency said in a briefing in February that Hwang was undergoing ideological re-education. Later that same month, on Feb. 15, Hwang was shown in a segment on Korean Central Television attending a ceremony marking the 76th birthday of the late leader Kim Jong-il.

Hwang was among Kim Jong-un’s entourage, but the North’s media at the time did not name him, and he was seen standing farther away from the leader than when he was director of the Army’s General Political Bureau, indicating he had a lower rank.

Kim Jong-gak, a former defense minister, succeeded Hwang, but his term only lasted from January to May. Kim Su-gil, former chairman of the Pyongyang City Committee of the Workers’ Party, took over afterward.