Korea’s highest-profile Me Too case goes to trial

Korea’s highest-profile Me Too case goes to trial 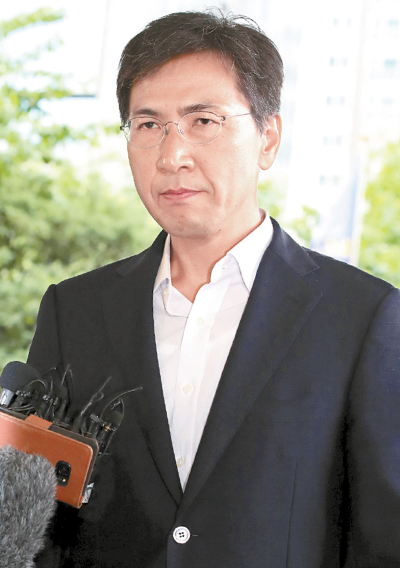 Former South Chungcheong Gov. An Hee-jung enters the Seoul Western District Court on Monday for the first hearing of his trial on charges of raping his secretary. [YONHAP]

The rape trial of former South Chungcheong Gov. An Hee-jung began on Monday at the Seoul Western District Court, the latest development in Korea’s most prominent Me Too case.

An, who was considered a strong presidential contender before his disgraceful exit, faces charges of raping his secretary, Kim Ji-eun, four times over the course of eight months while she was working for him. She has also accused An, 53, of sexually harassing her multiple times.

Kim, 33, first came forward with the allegations during an interview on “JTBC Newsroom” on March 5. Prosecutors indicted him on April 11.

In their opening statement, prosecutors described An as a “hunter who waits for his prey after setting a trap,” referring to the multiple times that he allegedly told Kim to buy him cigarettes or beer and sexually harassed her afterward.

They also said An used his “political and social influence in his powerful position as an influential presidential candidate to commit a typical power-abusing sex crime.”

An’s defense attorneys acknowledged that their relationship was sexual but argued it was consensual.

“There was no exercise of power involved,” they said, “and even if there was, it had no criminal intent and nothing to do with the sexual relationship.”

An, who is married, has maintained that his sexual relationship with Kim was entirely consensual. In an apology uploaded to his Facebook page the day after Kim went on air in March, An said that all the events were his fault but later said that he exercised no force on his part. On the same day, he resigned as governor.

A second victim, an employee at An’s political think tank who remains anonymous, came forward two days after Kim’s television appearance with a similar claim that she had been raped three times by An.

Prosecutors, however, decided over the course of their investigation that the second victim’s testimonies were inconsistent and did not include her case in their indictment.

In the courtroom on Monday, Kim sat in the front row and showed little reaction to the back and forth between the prosecutors and defense attorneys, save for a brief nod when prosecutors read out An’s charges. It was the first she saw her former boss in months.

An, too, was silent throughout the hearing and mainly sat with his eyes closed, though he occasionally took off his glasses, apparently weary by the proceedings.

During a brief break in between sessions, An had a momentary exchange with reporters gathered at the courthouse.

“All points in this case will be addressed in court,” he said. “I will abide by the judge’s decision that all words will only be spoken in court.”

Kim is expected to deliver her testimony to the court on Friday, though it will likely proceed closed to the public. Depending on how the trial proceeds, a verdict could come as early as the end of this month.