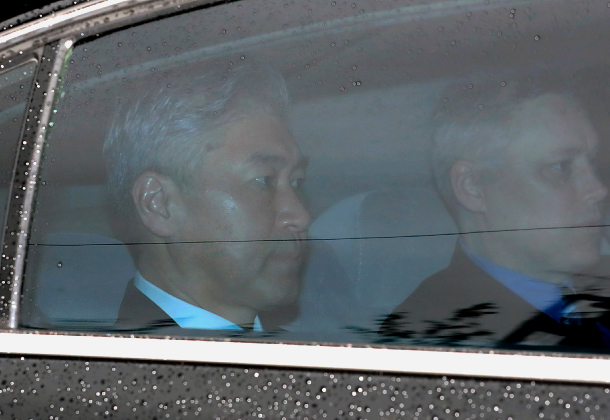 Sung Kim, the U.S. ambassador to the Philippines and a negotiator on denuclearization, sits in a car outside the Four Seasons Hotel in central Seoul on Monday. [YONHAP]

A team of U.S. negotiators led by Sung Kim met with North Korean officials at the border village of Panmunjom on Sunday to flesh out details of an agreement signed by the two countries’ leaders at their landmark summit last month, diplomatic sources in Seoul told the JoongAng Ilbo.

The meeting is the first follow-up to the summit in Singapore between U.S. President Donald Trump and North Korean leader Kim Jong-un.

Kim, a former negotiator on the North’s denuclearization and the current U.S. ambassador to the Philippines, asked the North for a declaration of all its clandestine nuclear programs, a first step toward denuclearization, the sources told the JoongAng Ilbo on the condition of anonymity.

Kim was seen leaving the Four Seasons Hotel in central Seoul on Monday, indicating that talks with the North were still underway, though Seoul refused to officially confirm the matter.

A high-level Blue House official speaking on background said the South Korean government was aware that Kim had arrived in the country for talks with the North in Panmunjom.

The American envoy, according to the sources, is also pressing the North for specific measures to repatriate the remains of U.S. soldiers who died in the 1950-53 Korean War.

North Korea has remained silent on how it will carry out the transfer, though Trump has repeatedly said that Pyongyang promised to return the remains.

U.S. Secretary of State Mike Pompeo, who is widely expected to land in Pyongyang this Friday, will likely ask the North Koreans to specify how and when they will tear down a missile engine test site that Kim promised to dismantle during his meeting with Trump.

As Washington gears up for follow-up talks with Pyongyang, Trump’s top aides have delivered contradictory messages about what the president wants.

On Sunday, John Bolton, the White House national security adviser, told CBS News’ “Face the Nation” that the United States would seek to have the North dismantle its weapons of mass destruction programs within a year. This includes chemical and biological weapons as well as ballistic missile test sites.

“If they have the strategic decision already made to do that, and they’re cooperative, we can move very quickly,” Bolton said, “and it’s to North Korea’s advantage to see these programs dismantled very quickly, because then the elimination of sanctions, aid by South Korea and Japan and others can all begin to flow.”

Bolton’s remark that the White House wanted to see the North completely denuclearize within a year sharply contradicted Pompeo’s earlier remark that his country would not put a timeline on the North’s denuclearization.

Pompeo told CNN last week that the administration would instead “constantly reassess” whether enough progress is being made with the North to continue talks.

But a report from The Wall Street Journal hints that Pyongyang may be up to something else.

The paper reported on Sunday that the North was completing a major expansion of a missile-manufacturing plant in Hamhung, on the eastern part of South Hamgyong Province, where the regime produced solid-fuel ballistic missiles and re-entry vehicles for missile warheads.

Satellite images analyzed by the Middlebury Institute of International Studies in Monterey, California, showed that the North was finishing construction on the exterior of the plant around the time that Kim held his summit with Trump on June 12.

The North claimed that it mastered its nuclear development program late last year, but experts have consistently thrown cold water on the claim, arguing that the regime has yet to prove it overcame the last remaining hurdles of atmospheric re-entry and precision guidance.

Meanwhile, Anthony Ruggiero, who has spent more than 17 years in the U.S. government as an expert on targeted financial measures, will begin his job next Monday as director of North Korea issues at the National Security Council, Mark Dubowitz, CEO of the Foundation for Defense of Democracies, said in a Twitter post.

Ruggiero’s addition to the council comes as the Trump administration stresses it won’t ease sanctions on the North until the regime fully denuclearizes.