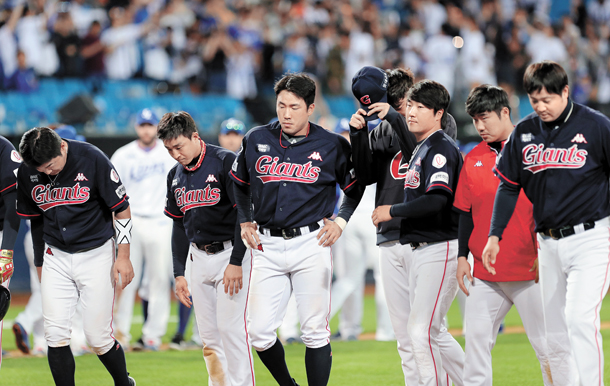 Veteran Lotte Giants first baseman Lee Dae-ho was just 10 years old when his team last won the Korean Series. Since that fateful summer in 1992, the Giants have failed to bring the Korean Series trophy home to Sajik Stadium in Busan. It looks like 36-year-old Lee may have to wait a little longer - despite having the best batting lineup in the KBO, the Giants still look likely to miss out on the postseason again this season.

But the Giants’ failure can’t be blamed on the batters.

During a game against the Hanwha Eagles on June 30, Andy Burns and Lee Dae-ho each scored a home run, bringing the team’s total number of home runs for June to 54, an all-time league record. The previous record for the most number of home runs was 52, set by the Haitai Tigers in May 1999.

Burns, who struggled at the beginning of the season, is slowly getting back in shape, hitting 12 home runs in his last 25 games, as of Tuesday. Outfielder Jeon Jun-woo and infielder Chae Tae-in have also been pulling up their batting averages to help the Giants’ home run streak.

Min Byung-hun added depth to the Giants’ batting lineup, returning to the club after a month off due to a rib injury. Son Ah-seop and Lee have continued to maintain their form as two of the best batters in the league.

The Giants were ranked first in team home runs and second in batting average at .295, slugging average at .520, 174 runs and 167 RBIs during the month of June. The Giants managed to record two-digit hits in 15 of 25 games.

But the Giants’ explosive performance at bat has had little impact on their league standing. As of Tuesday, the Giants have won 35, lost 41 and tied two games, ranking seventh. Based on recent results, it seems unlikely that the Busan team will be able to make it to the wildcard spot this season.

The Giants batters weren’t the only ones setting records in June - the bullpen also got its name in the history books. The pitchers allowed an embarrassing 10 come-from-behind victories in June and recorded an astounding eight blown saves. As a result, the Giants is the only club in the KBO to have its bullpen ERA above 7, at 7.01.

Son Seung-lak, the Giants’ closer, had two blown saves in May and was ultimately sent down to the Futures League. While he was gone, Son taught himself to throw a forkball, but it didn’t seem to make much difference when he returned to the KBO in June, allowing a three-run home run to the Eagles’ Ji Seong-jun during a game on June 30 for his third blown save of the season.

Jin Myung-ho, who was the setup man at the beginning of the season, is struggling to live up to expectations due to a lack of playing time in previous years, while Yun Kil-hyoun is still struggling to perform on the mound. Though Jang Si-hwan and Koo Seung-min have been pitching relatively well recently, the Giants are hesitant to put them up on the mound as they are so inconsistent.

Luckily, the starting rotation is starting to get back in shape. The Giants’ foreign pitchers - Felix Doubront and Brooks Raley - each picked up two wins in June. Park Se-woong, who returned to the Giants in June from an elbow injury, is slowly improving.

Noh Kyung-eun who was sent down to the Futures League after a disappointing game against the LG Twins on June 23, where he gave up six runs in three and one third of an inning, is expected to get back in shape once he returns.

In June, the Giants were only able to maintain their spot in the KBO by relying on high scoring games thanks to their flare for home runs. But since it seems unlikely that the team will be able to keep this home run streak up for the rest of the season, at some point the pitchers are going to have to start pulling their weight.

In June, 54 percent of the Giants’ runs were the result of home runs. The Giants hit 24 home runs in May and 28 in April. This means that once the Giants start hitting fewer home runs, they’re going to lose more games, considering their bullpen pitchers’ status.

The Giants had hoped that the return of their injured players in June would improve their performance. As that clearly hasn’t paid off, they desperately need to find a way to strengthen their bullpen with another full month left before the KBO takes a break for the Asian Games.

At the very least, the Giants need to maintain their current position if they are going to have any chance of clawing their way into the postseason.