Why we fall for dictators

Why we fall for dictators 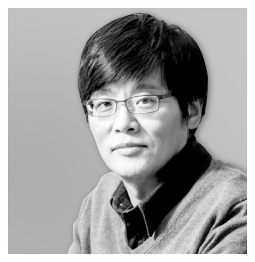 Lee Hoon-beom
*The author is an editorial writer at the JoongAng Ilbo.

Karl Marx argued that history evolves dialectically. I believe he was wrong. History does not progress; it repeats itself. Whenever society moves forward, it eventually retreats by just as much. In the end, we are back in the same place.

People often think history progresses because they confuse the development of science and technology with human progress. People believe they are smarter now because they can access knowledge that was once buried in the library stacks. But this is hardly the case. Some scientists argue that if a Cro-Magnon child were brought to the present in a time machine, even he could be educated to become a Nobel Prize-winning scientist.

The aggregated sum of knowledge has increased, but human behavior hasn’t changed. And since the principal agent of history hasn’t changed, there is no reason for it to progress. Otherwise, we would not hear such outdated titles as emperor, tsar, sultan or pharaoh.

Chinese President Xi Jinping has been called “Emperor Xi” for a while now. He removed term limits and broke down China’s collective leadership system, setting the foundation for a long, and perhaps permanent, reign at the top.

Russian President Vladimir Putin is serving his fourth term in power, having alternated between president and prime minister for the past 20 years. He is already considering a constitutional amendment allowing for a fifth term. 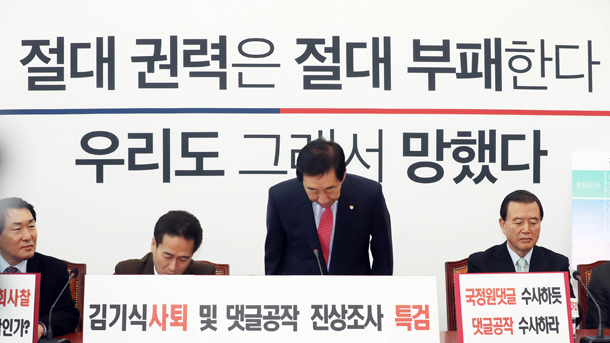 Kim Sung-tae, floor leader of the Liberty Korea Party, attends a meeting of party leaders in April. Behind him, a sign reads, “Absolute power corrupts absolutely. That is our fall.” Despite the warning, the embattled party suffered a crushing defeat in local elections on June 13. [YONHAP]

And it is ironic that Donald Trump, president of the United States, where a long-term dictatorship is least likely, is encouraging them to stay longer in power — all thanks to his reckless and authoritarian character.

Some argue that the long-term rule of these 21st-century kings are different from the deified power of the past. In an age of uncertainty, some citizens want charismatic leaders. If you replace charisma with populism, it somewhat makes sense. The people have chosen decisive leaders over democratic systems that have not improved their lives. Fareed Zakaria calls it “illiberal democracy.”

But they are wrong. If that’s how history progresses, then the progression from polytheism to monotheism should naturally lead to atheism. I cannot help but think of a tale from “Aesop’s Fables.” The frogs asked their god to send them a charismatic king, and the god sent a stork. The frogs were satisfied, but the stork ended up eating them all.

History does not progress because humans have not learned from the past. In the end, it is all because of human greed.
It applies to both leaders and the populace. It is hard to see the truth beyond greed, where absolute power is always exploited and everything becomes rotten over time. The leaders want to remain in power. The people settle for the present.

We have already experienced so many tragedies. We have witnessed that even a democratically elected president with a five-year term limit can easily abuse the office’s power. There is no guarantee that it won’t happen again because people always forget. That applies to both the leaders and voters. I am worried that Korea might join the axis of authoritarianism, if not now then later.