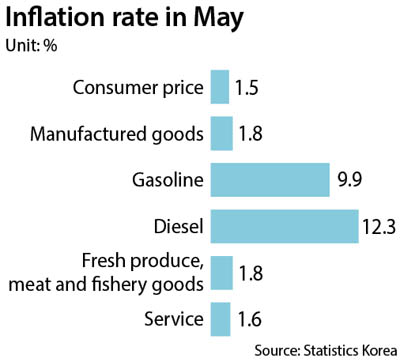 Inflation in June remained stable, as it grew in the 1-percent range for the ninth consecutive month. Compared to a year ago, consumer prices grew by 1.5 percent.

Meat prices fell by 7.4 percent year-on-year, contributing to an inflation rate that decreased by 0.20 percentage points.

However, this era of low inflation could be coming to an end. U.S. President Donald Trump’s administration has called on allies to end imports of Iranian crude oil by November this year, which could increase inflation further.

The last time petroleum prices increased this much was in April 2017, when they grew by 11.7 percent.

Gasoline prices in June were 9.9 percent higher than a year ago, while diesel prices surged by 12.3 percent. This raised the overall inflation rate by 0.44 percentage points.

International crude prices are also rising. Dubai crude, the most popular oil imported to Korea, averaged $68.27 a barrel in April but rose 9 percent in May to $74.40. As of Monday, a barrel of Dubai crude was valued at $74.33 per barrel.

One major concern is that rising crude prices will raise the production costs of Korean manufacturers.

According to the Hyundai Research Institute, when international crude prices reach $70 per barrel, the Korean economy shrinks an average 0.59 percent, with investment shrinking the most at 4.66 percent and consumption decreasing by 0.5 percent.

If crude prices reach $80 per barrel, the Korea’s economy declines by an average of 0.96 percent. Consumer spending falls by 0.61 percent and investment decreases by 7.56 percent.

“While spending is relatively sufficient, thanks to improving consumer sentiment due to easing geopolitical risk and government expansion, growth in corporate investments is falling steeply, including in the IT sector,” said Kwak Dong-chul, a researcher at IBK Economic Research Institute.

“Exports, while still led by semiconductors and petroleum goods, and other areas are showing signs of weakening export competitiveness, with rising trade conflict between the United States and China and revived sanctions against Iran.”

Overdue loan payments have also increased, not only on household debts but also on loans taken out by major businesses.

According to the Financial Supervisory Service on Tuesday, the overdue loan rate has risen 0.04 percentage points compared to a year ago to 0.62 percent, the highest since November 2016.

Fresh overdue loans that were late by more than a month amounted to 1.4 trillion won ($1.25 billion). Around 800 billion won worth of overdue loans were paid off, bringing the balance to 9.6 trillion won. The household loan overdue rate in May was 0.28 percent. Although it dropped 0.02 percentage point year-on-year when compared to the previous month, it rose by 0.01 percentage points.