Is North Korea sitting on a pile of rare-earth minerals?

Is North Korea sitting on a pile of rare-earth minerals? 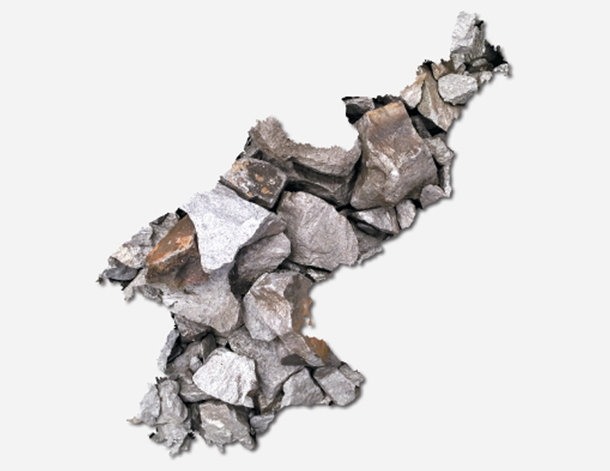 The Korea Institute of Geoscience and Mineral Resources, a state-run research institute, held a symposium on June 14 where experts in geology and natural resources gathered to talk about how they could further their research on the natural resources in North Korea.

The symposium took place amid growing interest from South Korea and abroad on the potential of the mineral deposits buried in the North.

After the historic summit between South Korean President Moon Jae-in and North Korean leader Kim Jong-un in April, high-ranking officials from the two Koreas met multiple times over the past few months to discuss how the countries can resume their cooperation.

Although officials are yet to talk about mining minerals and resources, the topic is still of great interest to researchers as well as mining and steel companies in South Korea, a country that is lacking in natural resources of its own.

According to data from the Korea Resources Corporation (Kores), a state-owned energy and resource company under the Ministry of Trade, Industry and Energy, there are about 40 different minerals buried in more than 200 locations across North Korea. The total value of the mineral reserves that North Korea is sitting on is estimated to be around 3,000 trillion won ($2.7 trillion).

The mining industry took up about 12 to 13 percent of the total gross domestic product of North Korea between 2013 and 2016 while making up 50 percent of the country’s exports. Mineral deposits are a crucial part of the North Korean economy.

North Korea may also own a large deposit of rare-earth minerals.

Rare-earth minerals are metals composed of the 17 rare-earth elements found in the periodic table. Their uses vary greatly from magnets to speakers and camera lenses to the materials used in nuclear reactors and MRI scanners.

The North Korean regime claims that it owns 20 million tons of rare-earth minerals, while other estimate the total deposit to be as much as 48 million, which, if correct, would make the country the second-richest in the world in those minerals after China.

Some experts predict that North Korea has especially large deposits of monazite, which could be used as a nuclear fuel resource.

Although South Korean companies have made investments in the North in the past, all these projects were indefinitely suspended when the South Korean government abruptly cut all ties with the North on May 24, 2010, after the sinking of a South Korean navy vessel earlier that year. Kores, for instance, invested about $6.7 million from 2003 to 2010 to mine graphite in North Korea. Over those seven years, the company brought about 1,000 tons of graphite across the border.

Field experts believe that by acquiring minerals from the North, South Korean manufacturers could slash logistics costs and stabilize the supply of materials.

“Korea is very dependent on mineral imports,” said Koh Sang-mo, director of the convergence research center for the development of mineral resources at the Korea Institute of Geoscience and Mineral Resources. “[For instance,] South Korea’s self-sufficiency in metallic ore is less than one percent. This means South Korea is very vulnerable and sensitive to fluctuations in global prices and supplies of mineral resources.”

Market analysts say that South Korean companies will be able to gain substantial benefits if they bring in metals from the North.

According to a study by a research center at eBest Investment and Securities, the average price of North Korean iron ore in 2017 was $62 per ton, about $10 cheaper than the global average.

“The total cost of iron ore imports is usually about twice the price of the metal itself,” said Jung Ha-neul, a steel industry analyst. “Bringing in iron ore from the North would cut the cost as well as the period required to transport the material into the country.”

Kim Mi-song, an analyst from Cape Investment and Securities, explained that steel product demand in North Korea stands at around 48 kilograms (106 pounds) per person, about five percent of demand in South Korea.

If the North Korean economy follows a similar growth pattern to that of South Korea in the ’80s and ’90s, the total demand for steel products would rise to as much as 23 million tons by 2040, a lucrative market for South Korean steelmakers such as Posco.

Using the iron deposits in North Korea - which are estimated to be around five billion tons - would also meet the steel demand in the peninsula for the next 30 years or so, the analyst forecasted.

But despite the promising prospects, there are some issues that must be settled before South Korea can start mining North Korea’s mineral deposits.

A researcher from the Korea Institute of Geoscience and Mineral Resources explained that the infrastructure in North Korea would need to be developed before mining could begin.

Another hurdle to overcome is the United Nations sanctions on the North.

Resolution 2371, adopted by the United Nations Security Council in August 2017, bars the trading of mineral resources from North Korea.

There are also limitations in predicting how much and where in the North different types of minerals are deposited until South Korean inspectors can conduct on-site investigations, some experts argue.

“It’s not easy to study the mineral deposits in North Korea,” said Koh of the convergence research center. “The only way for us to make predictions at the moment is by relying on data published by the North Korean government.”

“We do look up the geological information and studies done on other testbeds where similar types of minerals are deposited and create databases as well as calculate the size of reserves that way,” Koh added.

A source from Kores said that the South Korean government is cautious about revealing information about mineral reserves in the North due to the inaccuracy of the information.

Countries such as Japan - which purchases about half of the rare-earth metals mined in China each year - would also scramble to get their hands on the resources in the North.