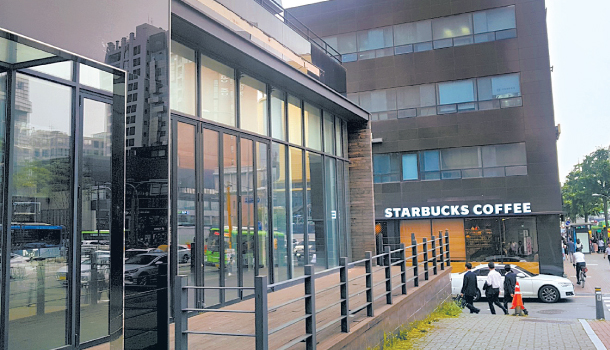 A shuttered Caffe Pascucci sits next to a new Starbucks location in Sinsa-dong in Gangnam District, southern Seoul. [HAM JONG-SEON]

The first floor of the Kyobo Building in the posh Gangnam area of southern Seoul, hosted a cafe from the Korean franchise Angel-in-Us Coffee for 14 years before it closed last February. Now, like many shuttered local coffee shops, it’s becoming a Starbucks.

“We were already facing a deficit on our monthly rental rate of 38 million won ($34,080), but we had to withdraw because the landlord raised the rent even more,” said Kim Jin-woo, head of the public relations team at Lotte GR, which operates Angel-in-Us Coffee.

The new Starbucks is the only street-level coffee shop on Gangnam Boulevard between Sinnonhyeon and Gangnam Station in southern Seoul, one of Korea’s busiest commercial strips. Starbucks also took over a branch of SPC Group’s Coffee@Works on the first floor of the Korea Post’s building in Gwanghwamun, central Seoul. SPC closed the store because it could not afford to pay the monthly rent of 50 million won.

Starbucks is taking over locations where domestic coffee shops have gone out of business due to rising rents and growing labor costs. New Starbucks locations are also popping up in key commercial districts with high rents.

Starbucks, Korea’s largest cafe chain by sales, opened 75 new locations in the first half of this year. Only six locations closed down, so the total number of Starbucks in Korea increased by 69. A Twosome Place, which came in second place, grew by 56 locations, with 79 stores opening and 23 closing.

The Fair Trade Commission banned coffee franchises from opening new stores within 500 meters (1,640 feet) of an existing cafe from the same brand in 2012. However, all 1,280 Starbucks locations in Korea are directly managed by Starbucks Korea, a joint venture between the American coffee giant and the Korean retail conglomerate Shinsegae. As none of the coffee shops are franchises, Starbucks is not subject to the limit.

The Kyobo Gangnam branch is across the street from two other locations, and there are 42 Starbucks coffee shops within a single kilometer (0.62 miles) of Seoul’s Gwanghwamun intersection. Since it debuted in Korea in 1999, Starbucks has focused on opening stores in central business districts. 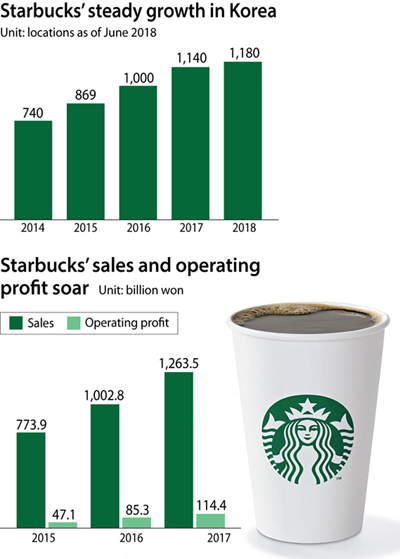 “The store development team decides whether to open a store after reviewing rent and coffee demand in the area,” a Starbucks Korea official said. “Even if there’s another Starbucks nearby, if we determine that there’s sufficient demand for coffee in a new building, we’ll open a new store in that building.” Fifty percent of Starbucks cafes pay building owners a commission on sales.

Starbucks has enjoyed success in the Korean market thanks to the brand’s strategy of “selling culture,” which the company says goes beyond just selling coffee. According to the Financial Supervisory Service, Starbucks Korea made 1.26 trillion won in sales last year, a 26 percent increase over last year. The company’s operating profit was 114.4 billion won, up 34 percent from 85.3 billion won last year.

However, some industry sources argue that local companies are disadvantaged due to the 500 meter buffer zone between franchises. Seoul, which has a population of almost 10 million, has around 460 Starbucks cafes. That’s 100 more than the 361 Starbucks locations in New York City, which has a total population of 8 million.

Some complain that Starbucks locations are unevenly distributed throughout Korea. Even in Seoul, the number of Starbucks differs greatly depending on the area. There are 112 stores in the city’s affluent Gangnam and Seocho Districts in southern Seoul, but only one store in all of Dobong District in northern Seoul. There are only five in Gangbuk District, northern Seoul, and six in Jungnang District in eastern Seoul. It’s easy to spot a Starbucks south of the Han River in Gangnam District, but it’s more difficult to grab a frappuccino in the capital’s northern regions.

“Many of my friends in Gangnam study in comfortable clothes at Starbucks locations near their homes, but I would have to go all the way to Ssangmun Station to find a Starbucks,” said Lee Ye-na, 21, who lives in Dobong District.

The price of a Starbucks latte in Korea is 4,600 won, about 20 percent higher than the average price of $3.50 in the United States.

While Starbucks only opens stores on main streets, many small coffee shops in alleys are suffering due to the coffee behemoth.

“Sales have dropped more than 30 percent since Starbucks opened a new location in the neighborhood,” said one local coffee shop manager in Sinsa-dong, southern Seoul.

Despite the criticism, Starbucks’ singular success is expected to continue, as Starbucks’ strategy of providing a “third place” outside of the home or workplace has proven appeal to Korean consumers.