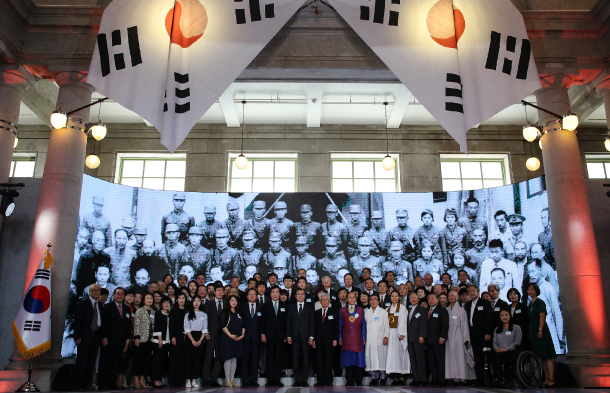 President Moon Jae-in, center, attends the launch ceremony of a committee to prepare celebrations for the 100th anniversary of the Korean independence movement at Culture Station Seoul 284, the former building of Seoul Station, in central Seoul on Tuesday. [YONHAP]

President Moon Jae-in called for joint programs between South and North Korea on Tuesday to commemorate the 100th anniversary of the Korean independence movement.

“The 70-year division between South and North has also divided the history of the independence movement,” Moon said at a ceremony to launch a committee that will organize celebrations for the Korean government-in-exile’s centennial next year. “If the South and North share the history of the independence movement, the gap will be narrowed. I ask the preparatory committee to explore potential joint projects.”

Moon revealed that he and North Korean leader Kim Jong-un had discussed joint events to commemorate the centennial during their summit in April at the border village of Panmunjom.

He also made clear that his administration views the provisional government established in Shanghai in 1919, when independence activists were fighting Japanese colonial rule, as the origin of South Korea.

The country’s founding date is a point of contention between liberals and conservatives. Liberals such as Moon view 1919 as the founding year, while conservatives argue that the country was established in 1948 with the inauguration of Syngman Rhee, an strongman who took power three years after Korea was liberated from Japanese rule.

Moon stressed that the modern country was established in 1919.

“The energy of this nation unleashed by the March 1 uprising for independence led to the founding of the provisional government of the Republic of Korea,” Moon said, referring to the date when activists read aloud a declaration against Japanese rule on March 1, 1919.

“By looking at the life story of the preparatory committee members, I also see the 100-year history of the Republic of Korea,” he said, using the official name of South Korea.

The committee comprises 88 members including descendants of independence activists, labor activists and former nurses who were dispatched to Germany during the 1960s and ’70s to work and send money back to South Korea.