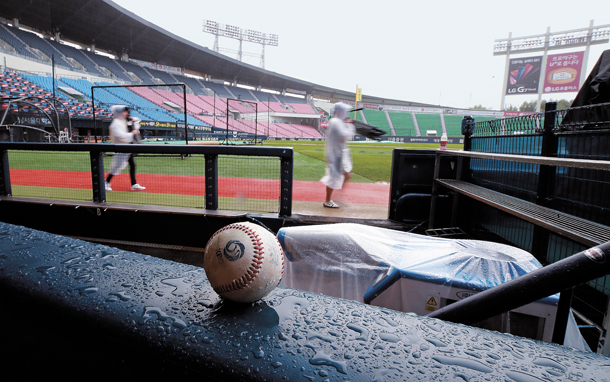 A photo of Jamsil Baseball Stadium in southern Seoul after a game between the LG Twins and the KT Wiz was canceled due to rain on June 28. [YONHAP]

The 2018 KBO season is expected to be the longest season in history.

With two more rain cancellations on Tuesday, a total of 34 games have already been missed this year and the rainy season isn’t finished yet. Just six more cancellations will tie the all-time record of 40, and there are still hundreds of games left to play. For the first time ever, three games were canceled this season due to fine dust levels.

Since June 26, when the rainy season began, there have been 11 cancellations.

Last season, 22 games were canceled during July and August. Assuming this year follows a similar trend, the record of 40 games will certainly be surpassed within the next few weeks.

The canceled games will be rescheduled for after October 1. Currently, the Tigers have had the most games canceled, at 10, and the Tigers’ season likely won’t be finished until at least the second week of October. The Lotte Giants have the second highest number of cancellations, at nine.

As well as the weather cancellations, the KBO will take a two-week break for the Asian Games from Aug. 16 to Sept. 3. As a result, the Korean Series won’t be completed until mid-November. The KBO does not schedule games on Mondays.

“Things aren’t looking good [in our game schedule],” said a KBO official. “We’re expecting the longest season ever. Aside from the total number of games canceled, the teams have such a big margin in game cancellations, varying by up to seven games. It’s not a problem to reschedule canceled games if the teams have a similar number of cancellations, but that’s not the case right now.”

The 2014 season, which ended on Nov. 11, currently holds the record for the latest finish. The Korean Series between the Samsung Lions and the Nexen Heroes that year didn’t end until after the sixth game in the series. Just like this year, the 2014 season also took a break for the Asian Games. The only difference this year is that the league has added a wildcard game in the postseason, between the fourth and the fifth ranked team.

The Heroes had the least number of game cancellations, at three, as they are the only team in the KBO to have a stadium with a roof.

“If we finish the regular season late, then we’ll start the postseason later,” said a KBO official. “We’re worried because this will cause a problem for the players and will make it difficult for the fans to watch the games.”

The KBO currently sets its projected regular season deadline at Oct. 10. The official hinted that the league is currently considering double header games or scheduling Monday games to finish the regular season by or before Oct. 15.

“[Considering the teams playing in the postseason], we’ll have to approach this carefully,” said a KBO official.

In addition, the canceled games can be a big factor in determining the postseason teams.

Since there are more injured players toward the end of the season, some teams may have to play without their starting players.