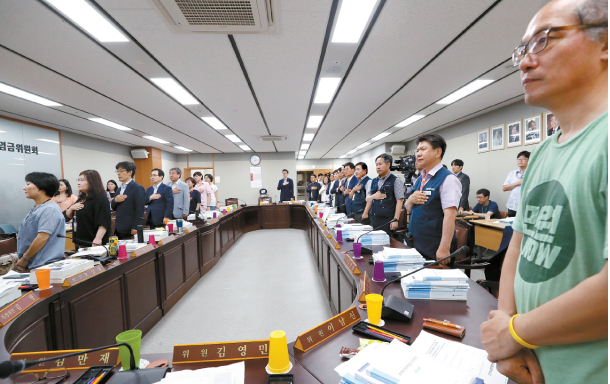 Five members of the Federation of Korean Trade Trade Unions demand the minimum wage be raised to 10,000 won (＄9) per hour at a Minimum Wage Commission meeting at the government complex in Sejong on Tuesday. [YONHAP]

One of the first actions President Moon Jae-in took after returning from sick leave over the weekend was to meet leaders of umbrella labor unions to get them back to the negotiation table to help decide next year’s minimum wage.

The government and the ruling Democratic Party have been putting major efforts into convincing all of the umbrella union representatives to return to talks that face a deadline less than 10 days away.

On Wednesday, Minister of Employment and Labor Kim Young-joo met with Kim Myung-hwan, head of the Korean Confederation of Trade Unions for 20 minutes.

The minister reportedly promised the union leader that the government will come up with follow-up measures that would compensate workers in low income groups for changes made to the definition of the basic wage in a reform bill that was passed by the National Assembly at the end of May.

However the meeting didn’t narrow the differences between the two sides. The union head refused Kim’s proposal and remained steadfast in opposition to the changes in the definition of the basic wage.

The union in late May announced that it was walking out of trilateral negotiations with the government and business representatives in protest of that change.

The union insists the changes largely neutralized the benefits felt by workers from a hefty increase in the minimum wage this year.

The failed meeting with the employment and labor minister came a day after President Moon met with the Korean Confederation of Trade Union’s Kim and head of the Federation of Korean Trade Unions Kim Ju-young in an undisclosed meeting.

This was the first meeting that the president had with the two umbrella labor union representatives since Jan. 19, when they were invited to the Blue House.

According to the Blue House, Moon listened to the union representatives’ opinions and requested that they continue dialogue even if the positions of the other parties are different from theirs.

“[I hope the labor unions] would understand that the government’s policy direction is towards respecting the workers,” Moon was reported to have said in response to the Korean Confederation of Trade Unions Kim raising doubts about the Moon administration’s promise of raising the minimum wage to 10,000 won ($9) per hour by 2020.

Five members of the Korean Confederation of Trade Unions attended negotiations that were held on Wednesday. However, four members of the other umbrella labor union continued to boycott them. It was the first meeting in 45 days with some union representatives. Twenty-two people, including nine from the government and eight from the business sector, participated in the negotiations.

The Korean Confederation of Trade Unions requested that the minimum wage negotiation shouldn’t start from this year’s 7,530 won but from 8,110 won to even out the impact created from May’s reform bill.

Initially the Minimum Wage Commission was supposed to reach an agreement on next year’s minimum wage by the end of June before passing it on to the Ministry of Employment and Labor.

That deadline has been pushed back to July 16. The Ministry of Employment and Labor will officially announce the decision on Aug. 5.

This is not the first time such negotiations failed to meet deadlines. There have been only eight occasions where the negotiations met their deadline in the 29 years since the commission was launched in 1988. Last year the negotiations continued until mid-July.