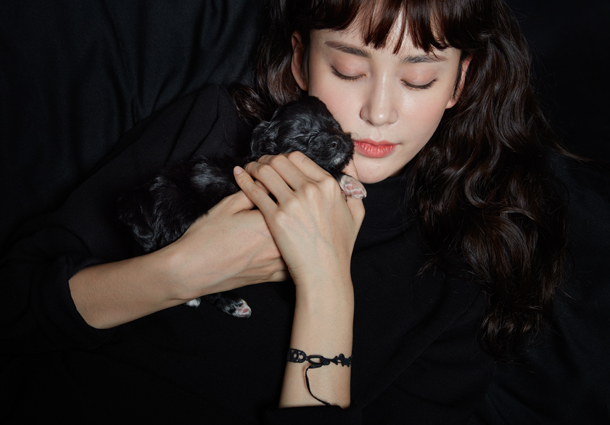 In hopes of helping people overcome their prejudices against dark-haired animals, “Black Dog Campaign: Save the Black Dog,” a photography exhibition, opened Wednesday at Platform Changdong 61, a cultural center in northern Seoul.

Organized by advertising company Innocean Worldwide and animal rights organization Care (Coexistence of Animal Rights on Earth), the exhibit will run through Aug. 26.

It hopes to change how people perceive animals with darker hair and encourage them to adopt more black-haired animals.

Black dogs are adopted less often and are euthanized at a higher rate, as they’re less likely to be adopted due to their color, according to a report from NBC News in January 2014. According to the report, people tend to prefer dogs with lighter coats, as they believe black dogs look depressing and can even bring bad luck.

President Moon Jae-in adopted his dog Tori from Care in July 2017. Korea’s first dog was rescued right before he was about to be sold off to a butcher, but he had not been adopted for over a year and a half because of his dark hair. In welcoming Tori to the Blue House, Moon mentioned the discrimination against black dogs. “The right to be free from discrimination and prejudice exists for both humans and animals, and I chose to adopt Tori out of that belief,” said Moon.

The exhibit features work from photographer Kim Yong-ho, who worked on the show for free. He was joined by 25 artists from C-JeS Entertainment to work on “Black Dog Campaign” in April.

“Not many people know that black dogs get adopted less frequently, but we could make people become aware of it through the ‘Black Dog’ project. I’m happy to be a part of something that helps encourage people to adopt [abandoned] black dogs,” said Kim.

The exhibit features images of black dogs and famed celebrities holding abandoned dogs in their hands.

It sends a clear message to the audience that they, too, can bring warmth and love to black dogs if they adopt them.

“It was such a meaningful time for me, and I got to take part in something so good,” said Park Sung-woong on the day of the photo shoot.

“I realized for the first time that black dogs get discriminated against,” said actor and singer Kim Jae-joong. “I hope people give them attention and love so that dogs do not face discrimination and get lonely and sad because of their color.”

“I’m honored that I could be a part of a campaign that helps these [dogs] get adopted,” said Hong. “I hope that this becomes a world in which black dogs and all abandoned dogs can live happily.”

Actor Kang Hong-suk took part in the photo shoot with his own black dog, Jady, who he adopted two months prior to the shoot.

According to Kang, he brought Jady home when he and his wife saw him lagging behind all the other dogs at the shelter. “I’m so happy to be a part of such a good campaign, and I think it will be great if more people can be a part of it together. I hope you can lend your support to the ‘Black Dog Campaign,’” said Kang.

All the other dogs photographed for the show are under Care’s supervision. The organization plans to also hold a special event called “Black Dog Campaign Day” during the exhibit’s run.

It will feature a pet-accessory market as well as other events that will encourage people to adopt more abandoned dogs as well as lectures on how to take care of furry friends. Interpark Pet, a sponsor of “Black Dog Campaign,” will also sell stuffed animals at the exhibit and donate all the income to Care.

Admission for the exhibit is free, and visitors can bring their pets. For more information, visit www.platform61.kr or call (02) 993-0575.