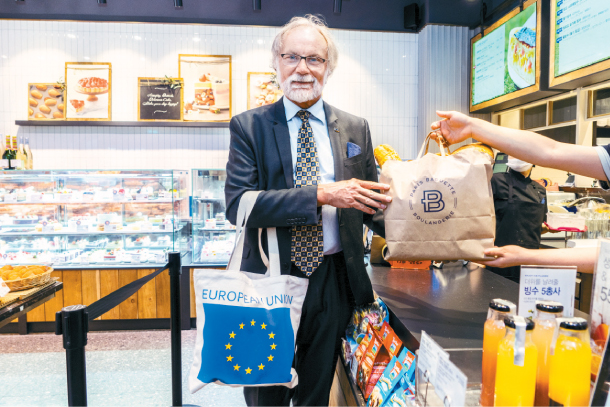 Paris Baguette and Tous Les Jours signed a voluntary agreement Monday with the Ministry of Environment and the Korea Federation for Environmental Movement to dramatically reduce their use of plastic bags.

Paris Baguette vowed to reduce plastic bag consumption by 90 percent by the end of this year, while Tous Les Jours plans on reducing plastic bag usage by 80 percent by next January.

The bakeries will begin use of more sustainable alternatives like paper bags and also recommend customers bring their own reusable bags for carrying purchases. Under current regulations, these bakeries are allowed to offer customers disposable bags free of charge.

The Environment Ministry estimates that if the two bakeries reach their plastic waste reduction goals, they can save a total of 230 million plastic bags and reduce 10,925 tons of greenhouse gas emissions a year.

The ministry said in May it discourages the production of plastic containers with colors or designs due to the difficulties in recycling them.

Paris Baguette also plans to decrease its plastic straw usage by 30 percent and introduce new disposable cup lids that can be used without straws by 2019. Tous Les Jours will remove color from its disposable cups, thereby making them easier to recycle.

Major convenience stores are also trying to do their share.

GS25 announced on Tuesday that its stores will begin offering customers paper bags from next Thursday, the first convenience store to do so.

Some other eco-friendly practices taken up by the convenience store chain include offering discounts of 100 won and 200 won on take-out coffee for customers who bring their own reusable cups and sending electronic receipts through the GS25 mobile app instead of printing out physical ones.

7-Eleven is embarking on a logo-free cup crusade starting today to allow recycling of its plastic cups.

Despite the risk of undermining brand awareness, the convenience store will remove the white 7-Eleven logos from its plastic cups containing ice that consumers purchase along with pouches of coffee or tea starting with a trial run in 10 stores this month.