Former Roh aide on how to rebuild Korean conservatism

Former Roh aide on how to rebuild Korean conservatism 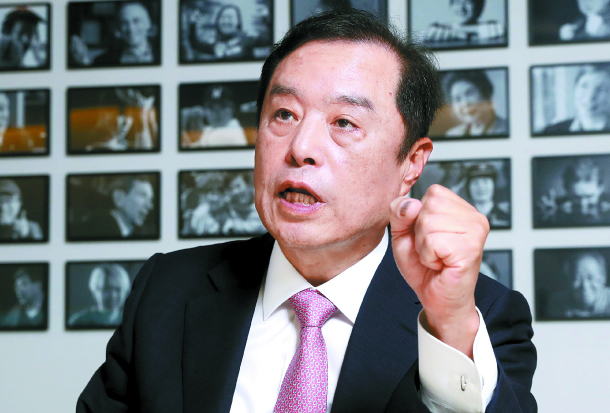 Korean conservatism is dying. The Liberty Korea Party’s election defeat on June 13 portended the end of the country’s right, and now, words of advice on how to save conservatism abound from all over, including progressives.

The left needs the right to keep Korean politics from running astray. People are now concerned about the balance of ideology in Korean politics. There is also fraught debate over whether the Liberty Korea Party (LKP) accurately represents Korean conservatism. Some argue for a clean sweep before building anything up again.

Those in the party largely agree that they have to reinvent themselves to survive. The citizens, though, remain skeptical and believe the party has a long way to go.

Two weeks after its election defeat, the LKP is still looking for people to lead its reform. Kim Byong-joon could be one of them.

Kim is an expert on decentralizing power to local governments. Ironically, he is best known for his work with former President Roh Moo-hyun, a liberal. During Roh’s term, Kim served as head of the Presidential Commission on Policy Planning.

In July 2006, Roh nominated him to serve as education minister, but he was forced to step down after just two weeks when the main opposition party accused him of plagiarizing a thesis and unfairly getting his daughter a spot in a foreign language high school.

In November 2016, when then-President Park Geun-hye faced a power abuse scandal that would ultimately end with her impeachment, she appointed Kim to lead a “neutral cabinet.” She withdrew the nomination six days later.

The JoongAng Ilbo recently spoke with Kim about his views on Korean conservatism. Below are edited excerpts from the interview.

Q. What do you think caused the LKP’s crushing defeat in the local elections?

A. Its former head, Hong Joon-pyo, blamed others in the party in his supposed last Facebook post. The party is still divided between pro-Park and anti-Park factions (referring to former President Park Geun-hye). I don’t think kicking out the pro-Park faction will solve their problems.

Their real problem is something entirely different. They’ve lost their historical narrative. The Democratic Party has its own values, even if they might not all be practical. They talk about human rights, the environment and peace, among other things. But what do conservatives talk about? What does the LKP talk about? Peacekeeping was one of their core values, but they’ve let that one go as the current government is doing it so well. There needs to be some serious debate over what went wrong, but there isn’t one.

What do you believe are conservative values?

On both sides of politics, there is a mix of irreconcilable values. Conservatives still praise former President Park Chung Hee’s legacy. His was a state-dominated model where the government controlled society, interfered in the market and sacrificed human rights for the sake of economic growth. But a lot of conservatives say that a free market economy is a conservative value. This is confusing for a lot of Koreans. Progressives largely want some economic planning from the state. But some progressives are more communitarian, pushing for social enterprises, cooperatives and a civil society.

Do you mean to say that reconfiguring values is more important than filtering out people?

Of course, we have to filter out people, too. But values need to come first. Conservatives first need to establish what values their party is going to focus on. Only then can people who don’t agree with those values leave. It’s about what comes first. Should we tell people to leave because they’re pro-Park or because they don’t match the party’s values? I think the latter.

The LKP is still divided into factions and quarreling among themselves. Is there a way to overcome this?

If you can’t cut things out, you have to build things up. It’s really hard to throw out people and their thoughts. If you can’t get rid of the old, you need to develop the new that will cover it up. Construct something new, and everything else will seep into it.

Won’t they need some outsiders to freshen up the party?

I presume that’s what they’re going for. Most of the insiders have been hurt by cynicism from people saying, “I don’t think you will change anything.” They need someone who really seems like he or she can change something. The more insiders relinquish their power, the more citizens will trust them.

Did the LKP ask you to lead their reform committee?

A lot of people have talked about it. They call me and ask to see me. But I can’t say anything. The official channels aren’t functioning right now. I do believe I need to do what I can for our society’s balance, but the conditions in which I do so are also very important for me.

Right after the elections, a lot of people told me that I absolutely had to take the position if the party offered it. But for the last two days, nine out of 10 people who have called me have said, “Don’t you step foot toward them.” They think the LKP still has to suffer more. Public sentiment can be scary.

How would you identify yourself politically?

I value a free market and community. We need to make a mechanism that allows the market to be free and, at the same time, capable of fixing its own errors. Errors that cannot be fixed by the market itself, such as polarization, should be fixed by the state. The state’s role is to create a structure of coexistence through social policy, welfare and keeping the country safe and secure.

When the LKP suggested you run for Seoul mayor, you considered it for a while before saying it was too late.

I’m never looking for positions of power. What I need is a megaphone. But they suggested I run at the last minute, and I didn’t have time to hold up that megaphone. I thought it wasn’t worth it.

I think my warning still stands. They speak of autonomy and decentralization, but in reality, they’re trying to use government power to strengthen supervision and the prosecution. They try to take that mandate from the people, so they don’t even bother with anything that’s not populist, like reforming Korea’s industrial structure. They don’t touch that because that would breed conflict with labor unions.

Do you think unemployment and the minimum wage are populist issues?

I think they are. They’d be lying if they said they don’t know the limits to income-led growth (Moon’s core economic policy). Of course they know. They can’t deny that employment is down. They all know that focusing on the domestic sector won’t do much in an export-oriented economy. They know all this but still put their interests above reforming the industrial structure. Such a popular administration should take on this reform. There has never been a better time. But it looks like they aren’t going to do it, and that’s what concerns me.