In four-rivers, aim was still canal

In four-rivers, aim was still canal 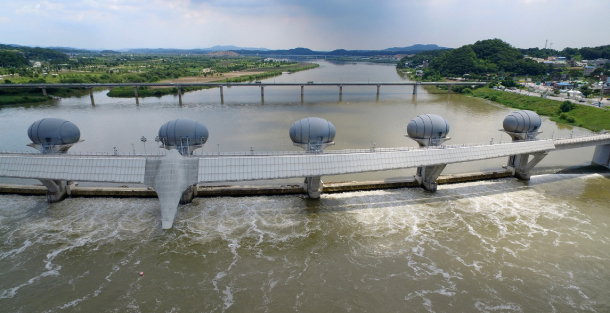 The Han River flowing through Yipo Weir in Yeoju, Gyeonggi, on Wednesday. The weir was one of the results of Lee Myung-bak’s four-rivers restoration project. [NEWS1]

Former President Lee Myung-bak’s administration disregarded environmental concerns when it pursued a controversial project to dam four of the country’s major rivers, the Board of Audit and Inspection concluded on Wednesday.

The board also found that Lee intended the project to lay the groundwork for his greater vision: building a grand canal to connect the west coast to the southeastern coast. The plan foundered in June 2008 after facing heavy criticism for lack of practicality.

Lee still wanted to pursue the project, according to the report, and developed the now controversial four-rivers restoration project as a stepping stone despite publicly announcing that the grand canal idea had been killed.

Possibly one of the largest construction projects in Korean history, the four-rivers project aimed to develop areas around the Han River, Geum River, Yeongsan River and Nakdong River by building 16 weirs, five dams and 96 reservoirs. The goal was to reduce floods and conserve water in the event of droughts.

As one of the Lee administration’s central objectives, the project has been at the center of political wrangling for nearly a decade and drawn fierce criticism from civic groups who blame it for worsening the rivers’ water quality.

Despite the project’s astronomical costs, critics say it has done little to improve Korea’s water problems during droughts and floods. The audit board’s report on Wednesday estimated that around 31 trillion won ($28 billion) was spent on construction, but the economic benefit in the next 50 years will only amount to 6.6 trillion won, 20 percent of the original investment.

The controversy surrounding the project prompted President Moon Jae-in to order an inquiry into the project as soon as he took office in May last year. The Board of Audit and Inspection began an investigation into the project’s implementation the following month. Wednesday’s report was the product of a year-long audit and the fourth dealing with the four-rivers project.

The report revealed that the Ministry of Land, Transport and Maritime Affairs submitted two blueprints to Lee in November 2008 that recommended the dams be built at a depth of 2.5 to 3 meters (8 to 10 feet) to fulfill the project’s main purpose of water conservation. The president rebuffed the proposal, according to the report, and personally ordered the dams be built deeper to around 4 to 6 meters, enough to turn parts of the rivers into canals.

The Ministry of Land, Transport and Maritime Affairs did not conduct additional research to evaluate whether Lee’s demands were technically appropriate, the audit found, and instead revealed a final four-rivers plan in June 2009 that reflected Lee’s wishes. Construction began that year and finished in 2011, two years before the end of Lee’s term.

The Board of Audit and Inspection additionally revealed that the presidential office ordered the Ministry of Environment to keep quiet about the possibility of water pollution and algal blooms from construction of the weirs.

Lee and his former aides continue to defend the project as a successful implementation of his administration’s sustainable development policies. Officials from the Board of Audit and Inspection said they contacted Lee during their inquiry to ask about his personal involvement in the project, but he refused all interviews.