In 2016 Dustin Nippert went down in Doosan Bears history when he led the team to the Korean Series title with 22 wins and just 3 losses. Nippert - once known as the “Nippert the Almighty” - still holds a special place in the hearts of Bears fans, remembered as one of the best pitchers the team has ever had. 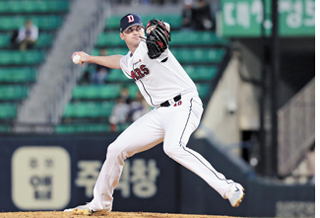 Seth Frankoff of the Doosan Bears throws a pitch during a game against the KT Wiz at Jamsil Baseball Stadium in southern Seoul on May 3. [YONHAP]

In 2018, Nippert moved to Suwon with the KT Wiz and the Bears were left with a huge hole in their pitching rotation. Surprisingly, it was the club’s decision to drop just $700,000 on a little-known player from North Carolina that gave the KBO its new best pitcher. Nippert no longer rules over Jamsil - Seth Frankoff has arrived.

Frankoff has got off to a phenomenal start in his first season in the KBO, having not lost a single game. After picking up another win against the Lotte Giants at Sajik Stadium on Wednesday, Frankoff extended his winning streak to 13 with an ERA of 2.70. On Wednesday he gave up only two runs while striking out six in seven innings.

Frankoff leads the league in wins - followed by teammate Josh Lindblom with 10 - and is second in ERA. He is the only pitcher with a winning percentage of 1.000.

In the league ranking, Frankoff is first in wins, a good three games ahead of his teammate Josh Lindblom, second in ERA, at 2.70, and a leader in winning percentage, at 1.000.

Frankoff’s incredible debut came as a surprise as he joined the Bears with very little experience in the majors. After playing at the University of North Carolina at Wilmington, Frankoff was drafted by the Oakland Athletics in the 27th round of the 2010 MLB draft and played in the Athletics’ minor league teams from 2010 to 2015. During the 2014 season, Frankoff got as high as the Athletics’ Triple A team.

In 2016, Frankoff joined the Los Angeles Dodgers’ system, before moving to the Chicago Cubs system in 2017. He finally made his big league debut with the Cubs in 2017, appearing in only one game. Frankoff then moved to the Seattle Mariners but was granted a release in December last year in order to move to the KBO.

Although the KBO doesn’t exactly attract foreign players that have been dominating the majors, some experience is preferred. Frankoff’s resume meant he signed with the Bears for only $700,000, considerably less than Lindblom’s $1.45 million.

But Frankoff arrived in the KBO with something to prove. He exploded onto the mound in his first game and has proved unstoppable ever since, earning a spot in the All-Star Game next week.

Though Frankoff wasn’t named as one of the 24 players selected by fans, coaches and the player votes, he was added as a manager’s pick on Thursday, by Bears’ manager Kim Tae-hyung, who will be managing the Dream All-Stars team.

Looking at Frankoff’s wins this season, he is well on pace to set a new record for the most wins in a single season.

Nippert currently holds the record at 22, tied with former Bears pitcher Danny Rios who initially set the record in 2007.