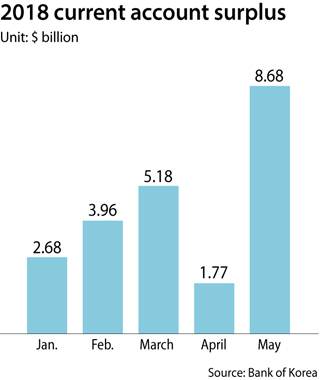 Thanks to strong exports of computer chips, Korea’s current account surplus reached its highest level in eight months in May. The trade account set a new record for its longest-running surplus, hitting its 75th consecutive months.

The central bank said the current account surplus was due to strong exports of memory chips.

“Thanks to the favorable growth in the [global] semiconductor market, exports increased by a large amount,” said a BOK official. “Additionally, imports also saw strong growth on the back of escalating international crude prices and greater demand for consumer goods.”

Despite rising global protectionism, Korea’s exports went up. Exports to China rose the most, at 30 percent, up from April’s 23.1 percent. In May, $13.9 billion worth of Korean goods were shipped to the neighboring country.

Exports to Japan came in second, with 15.8 percent growth. Exports to the United States reversed the previous month’s 1.4 percent decline to 11.8 percent. Exports to the Middle East, on the contrary, fell by 6.3 percent, a turnaround from after their 8.3 percent increase in April.

While the goods account has contributed to the overall current account surplus, the service sector continued to struggle, despite an increase in the number of Chinese tourists visiting Korea.

Last year, the local tourism industry suffered heavily, as China protested against the installation of a U.S. antimissile system in Korea. But as relations have improved recently, Chinese tourists have started to return.