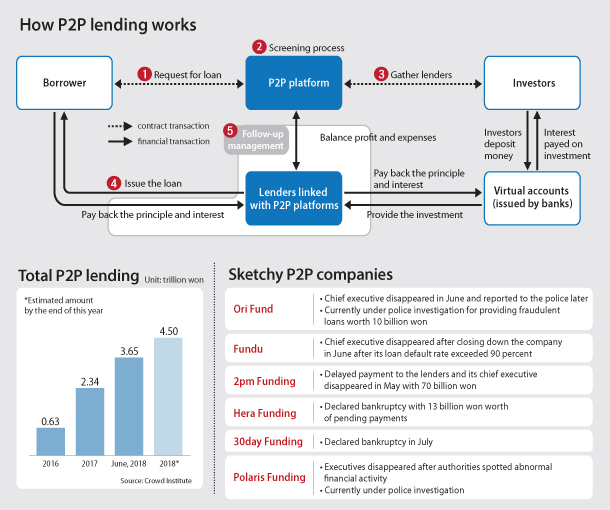 Korea’s peer-to-peer (P2P) lending market is turning out to be a Wild West of hucksters and frauds, and government regulations are nowhere in sight.

P2P lending refers to online platforms that connect investors and lenders directly, with no need to go through a bank.

P2P platforms are supposed to allow investors to offer loans to people who need them, while platform developers take a small commission for connecting the two.

These lending services have surged in popularity, as they offer much higher returns than investment products offered by banks.

According to Crowd Institute, a research center that specializes in P2P financial markets, to date, about 3.65 trillion won ($3.2 billion) of P2P loans have been taken out in Korea, about five times the amount from two years ago.

However, the rapidly-expanding P2P market is also proving to be a lawless place, as fraud, embezzlements and defaults are on the rise.

Currently, seven Korean P2P loan companies are under investigation by the police.

Fundu, which used to be the third-largest P2P lending company in Korea, closed down after its loan overdue rate exceeded 90 percent earlier this year, and the company’s CEO Nam Sang-woo fled overseas. The police believe Nam is currently in Africa, and in May they canceled his passport. About 2,800 investors reportedly suffered total losses of 21.6 billion won.

2pm Funding postponed their investment returns, and in May the company’s owner, only known by his surnamed Chun, fled to Japan with 70 billion won. The company’s registered CEO Hong Young-pyo turned out to be Chun’s driver.

Hera Funding in May filed for bankruptcy after failing to return 13 billion won to its investors.

The three top managers of the real-estate based P2P lending company Ana Reits were arrested on Wednesday on charges of embezzling over 100 billion won in investment.

According to the Suwon prosecutors’ office, the three executives collected 113.8 billion won from 10,000 investors between September 2016 and this June. However, instead of allocating the funds that they have collected to the promised loans, they used the money to buy stocks and pay management expenses and only paid the interest and principle loans for the investors.

The most recent company to be ensnared in a fraud scandal is Polaris Funding. Investors in the company filed a report against Polaris Funding and its CEO on fraud with Yeongdeungpo District police on Wednesday.

The company, which was founded in October, has accumulated loans worth 12.4 billion won.

PayGate, a company that provides a platform for P2P lending, said it detected suspicious cases where money meant for Polaris’ borrowers instead ended up in other people’s bank accounts.

When PayGate reported its suspicions to the Financial Supervisory Service (FSS) after Polaris did not respond to requests for an explanation, the company closed its office in Yeouido, western Seoul, and went silent.

As the number of cases of fraud rises, financial authorities are being criticized for not actively preventing the situation.

The FSS, which oversees Korea’s financial markets, says that unlike conventional financial companies like banks, brokerage firms and insurance companies, there’s not much it can do about P2P loan providers, as there’s no law that allows it to investigate these companies.

The FSS releases guidelines for P2P companies in February, but it isn’t legally binding.

In the case of Polaris Funding, the FSS knew about the fraud due to investor reports, but it didn’t take any immediate action, such as warning investors or freezing transactions.

The Financial Services Commission has since March required P2P lending firms to register with the government if they establish traditional lending subsidiaries. As a result, the FSS has indirectly looked into 75 P2P loan companies in April, and plans to conduct an investigation into 108 companies by the end of September.

“Our investigation is difficult, because most of these subsidiaries are paper companies,” said a FSS official. “Even if we request documents, [there’s nothing we can do] if they refuse.”

The FSS official said that while its agents are trying to collect information to use against the companies, it hasn’t been easy.

“Some of the dubious companies, since registration for subsidiaries has been required, have been intentionally going bankrupt or are going into hiding,” the FSS official said.

According to experts, there’s an urgent need to create regulations on the P2P industry, as the fraudulent companies are giving the nascent industry a bad name.

Currently, there are four related bills awaiting approval by the National Assembly. The bills were proposed from three months to a year ago, but lawmaker’s still haven’t had a proper discussion on the issue.

Ki Joon-ha, a legislative researcher at the National Assembly Research Service’s finance and fair trade team, said laws need to be put in place now and revisions must come later.

“We’re in the process of picking out rotten companies and ousting them through government investigations and the industry’s own efforts,” said Kim Byung-ha at the Korea P2P Finance Association. “The market will grow with sound companies as its center once P2P lending guidelines are reformed and related laws are introduced.”