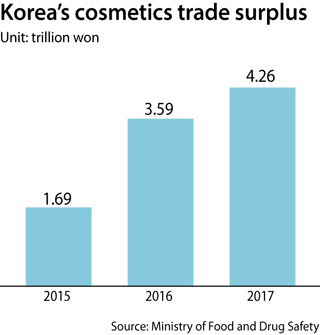 K-beauty is on the rise overseas.

Cosmetics exports have recorded a trade surplus for the last six years, and first broke the one trillion won threshold in 2015. Korean cosmetics exports expanded rapidly over the last five years, with growth averaging 40.1 percent per year.

China imported the most Korean cosmetics last year, at 2.2 trillion won. The report pointed out that cosmetics exports to China rose by 23.1 percent despite the installation of the U.S.-led Thaad antimissile system in Korea, which lead to a Chinese boycott of Korean companies.

Despite China’s continued preeminence, export destinations grew compared to the past.

Exports to Vietnam last year almost doubled, while those to Indonesia rose 60.8 percent over 2016. New additions to the top 20 importers of Korean cosmetics were Germany, Poland and the United Arab Emirates.

According to the report, this is a sign that Korean beauty products are gaining a reputation for quality.