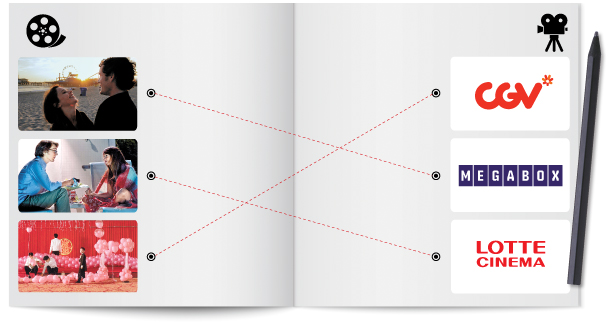 At left, from top to bottom are scenes from “Like Crazy,” “Ruby Sparks” and “A One and a Two,” which were all screened predominantly at franchise cinema chains. Operators of indie art cinemas are up in arms over film distributors’ decisions to screen indie art films mostly at franchise cinemas. [POP ENTERTAINMENT, LITTLE BIG PICTURES, SCREEN CAPTURES]

Distributors of indie art films have long relied on art house cinemas to be the venues that audiences can visit to see their movies. But some art house cinema operators have started to complain that they are being discriminated against by indie art film distributors, who are increasingly showing their films only at multiplex cinema chains like CGV, Lotte Cinema and Megabox.

The issue first arose in 2014 after the opening of CGV Arthouse, which focuses on screening arthouse and independent films. CJ CGV, which is the nation’s largest theater chain, first opened the multiplex indie theater in 2004. It changed its title to Movie Collage in 2007, and the theater chain’s efforts to make a bigger impact in the indie film market began in 2014 when they changed the name to CGV Arthouse. There are currently 25 CGV Arthouses nationwide.

Over the past few years, indie film distributors have shown a tendency to screen their movies exclusively at a franchise cinema chains. Though insiders regarded it as a temporary phenomenon at first, it has grown to become a common occurrence in the industry.

“Call Me by Your Name” (2017), which premiered at the Sundance Film Festival and won Best Adapted Screenplay at this year’s Oscars, was screened solely at CGV in March. Lotte Cinema was the only place audiences could see fantasy romance flick “Ruby Sparks” (2012), while Megabox was the sole theater chain to screen romance movie “Like Crazy” (2011) in May.

Recently, the issue of cinema chains’ exclusive screenings of indie art film resurfaced following the re-release of “A One and a Two” (2000), for which Edward Yang received the Best Director Award at the 2000 Cannes Film Festival. The film was originally scheduled to be shown at art house cinema Cinespace Juan in Incheon, but the deal was suddenly called off by its distributor, Little Big Pictures.

A representative from the distributor apologized for the cancellation and said it was because of the miscommunication, mainly derived from holding a film event.

“Distributors of small films usually hope to hold a special screening where audiences can attend various film events following the screening [to maximize profit],” the representative said. “But it costs quite some money, and it’s true that multiplex cinemas are better equipped to cater our demands.”

“A One and a Two” hit movie screens at CGV Arthouse and two other smaller cinemas on June 28. CGV Arthouse is planning for the film’s special screening this weekend, and audiences will be provided with various goods following the screening.

Little Big Pictures denies having given CGV the exclusive right to screen the movie, as the film is currently being screened at two smaller cinemas - Gwangju Theater in Gwangju and Eivom Theater in Gangnam, southern Seoul - and will be shown at three more art house cinemas next week.

But insiders regard the plan as the distributor’s way of avoiding a controversy, according to Lee An, the director of Cinespace Juan.

After verbally promising everything about the screening of “A One and a Two,” she was told by the distributor to screen the movie a week after CGV starts showing it. She was notified two weeks in advance of the promised screening date.

She says it was all part of the distributor’s plan to maximize profits.

Other operators of art house cinemas are also upset about the incident.

“Giving the [first screening] rights to screen a film to a multiplex chain, and enjoying the marketing power of the conglomerate in return is a revenue stream that is collapsing the ecosystem of indie film community,” said Choi Nak-yong, vice-president of Arthouse Momo in western Seoul. “There is no guarantee this method of distributing film will become the norm.”

“Many art and independent movies usually deal with sensitive and controversial topics [especially related to the government]. Since conglomerates are not free from the government influence, the role of art house cinemas is crucial in protecting the diversity of smaller films,” said Choi.

Culture critic Kim Heon-sik said, “If conglomerates become the hub of indie films, it is likely that the movies that are accessible will become more and more uniform, as they will only screen films that fit their tastes.”

People from art house cinemas are also unhappy with being forced to screen movies a week after it plays at major theater chains.

“We are not a cinema devoted to screening re-releases,” said a representative from ArtNine in southern Seoul. “And the number of viewers [drops drastically] in the second week of a film’s release.”

Choi from Arthouse Momo also said, “Being restricted to screening [only] in the second week is an extreme insult… It is not being treated as an equal partner.”

But some say there are positive aspects of multiplex chains screening smaller flicks.

“Some movies that would have easily been unnoticed are able to receive spotlight thanks to the involvement of multiplex chains,” said a representative from Forest Art Cinema in northern Seoul. “But it can’t be denied that lots of discussions need to be had to solve the issue of the chains’ involvement in screening smaller [independent] movies.”