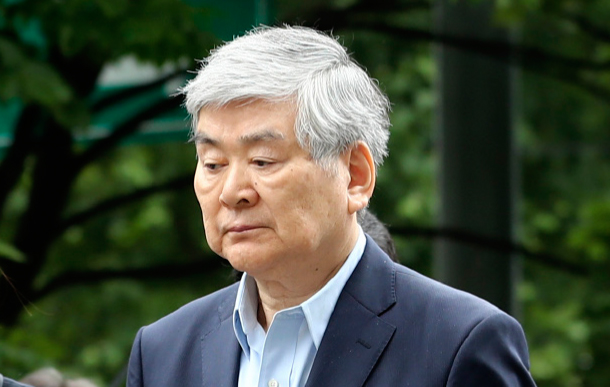 Cho, 69, is accused of evading over 50 billion won ($44.7 million) in inheritance taxes with his sister. The Seoul Regional Tax Office determined earlier that Cho and his sister did not report their inheritance of overseas assets and filed a complaint against the family with the prosecution.

Cho is additionally accused of unfairly awarding contracts to companies run by his own family members and embezzling over 20 billion won in corporate funds.

The court had not made a decision on the arrest warrant by press time Thursday.

In requesting an arrest warrant for Cho, prosecutors also accused him of violating the Pharmaceutical Affairs Act. Prosecutors said Cho operated a pharmacy without a license, raking in over 100 billion won illegally since 2008. The specific pharmacy is located near Inha University Hospital in central Seoul, where Cho is a chairman of the board.

Cho’s family is spending a lot of time in court these days.

His wife Lee Myung-hee attended an arrest warrant hearing earlier last month for allegedly assaulting and insulting employees, including throwing pruning shears at a janitor in her residence in Pyeongchang-dong, central Seoul, and attacking employees at a hotel construction site in 2014.

The Seoul Central District Court dismissed the request for Lee’s arrest, stating there was no need to have Lee arrested while she is investigated. Police requested the arrest warrant once again in June, but it was dismissed again.

Cho and Lee’s two daughters, Cho Hyun-ah and Cho Hyun-min, and their only son Cho Won-tae, are also undergoing investigations. Cho Hyun-ah is famous for the “nut rage” incident that made her the subject of global ridicule in 2014 when she ordered a taxiing Korean Air plane at New York’s John F. Kennedy Airport to return to a gate because she was dissatisfied with the way a flight attendant served her macadamia nuts, given to her in a bag rather than in a bowl.

Cho Hyun-ah faces allegations that she and her family smuggled luxury goods into the country without paying taxes. She was summoned to the Incheon Main Customs Office on Tuesday for a third round of questioning since early last month.

Cho Hyun-min, the youngest daughter, is being investigated for throwing a cup of juice at employees during a meeting in March. Police requested an arrest warrant for Cho in May, but it was dismissed when the employees said they didn’t want Cho punished.