Samsung’s streak of record profits comes to an end

Samsung’s streak of record profits comes to an end 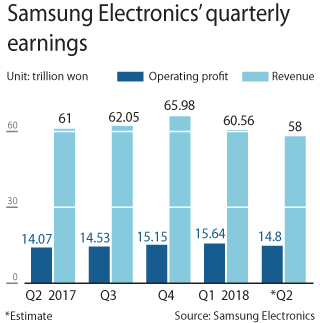 Samsung Electronics set records with its last seven quarterly operating profits, but its hot streak has come to an end.

The tech giant said in its second-quarterly earnings guidance Friday that its operating profit fell by 5.37 percent from the previous quarter of 2018 to an estimated 14.8 trillion won ($13.3 billion).

Its revenue also dwindled by 4.23 percent from last quarter to 58 trillion won. Analysts believe disappointing sales of Galaxy S9 smartphones and reduced profits from its display business were the main factors behind the sluggish results.

The operating profit for the April-June period was lower than analyst’s earlier consensus of 15.27 trillion won, which was compiled by market information provider FnGuide.

The guidance provides averages for the range of operating profit and revenue for the quarter, Samsung will release confirmed figures by business sectors three weeks from now.

When compared to the second quarter of 2017, operating profit was up by 5.19 percent, but revenue fell by 4.92 percent.

“Operating profits at all of the business sectors at Samsung for the second quarter are forecast to fall, except for semiconductors and consumer electronics,” said Lee Soon-hak, an analyst at Hanwha Investment and Securities. The ongoing supercycle in the chip industry is still boosting Samsung’s earnings, he added.

In the first quarter, Samsung’s semiconductor division posted 11.55 trillion won in operating profit, the best result in the company history. Analysts project the profit from the division amounts to more than half of Samsung’s entire second-quarter operating profit.

The IT and mobile division, which is in charge of smartphones, is projected to have made only around 2.5 trillion won in operating profit, down more than 2 trillion won from the 4.6 trillion won it made in the second quarter of last year.

Eugene Investment and Securities lowered its shipment estimate for the Galaxy S9 in the second-quarter from 15 million to 9.5 million units. It also decreased its expected total 2018 shipments for the S9 to 31 million units, down 19.5 percent from 2017’s S8, which shipped 38.5 million units.

Some other brokerage houses are also revising their yearly sales estimates for the S9 to below 30 million. Consumers and experts say the phone lacks unique features compared to its predecessor.

Samsung shares ended 2.29 percent lower at 44,900 won on Thursday, an all-time low closing price since the company’s shares were split 50 to 1 at the end of April. Ever since the split, Samsung stocks have fallen by 15.3 percent. But according to analysts, Samsung shares may have hit rock bottom, given that concerns over second-quarter earnings have been sufficiently reflected.