Travel gets a little cheaper as carriers revamp roaming deals

Travel gets a little cheaper as carriers revamp roaming deals 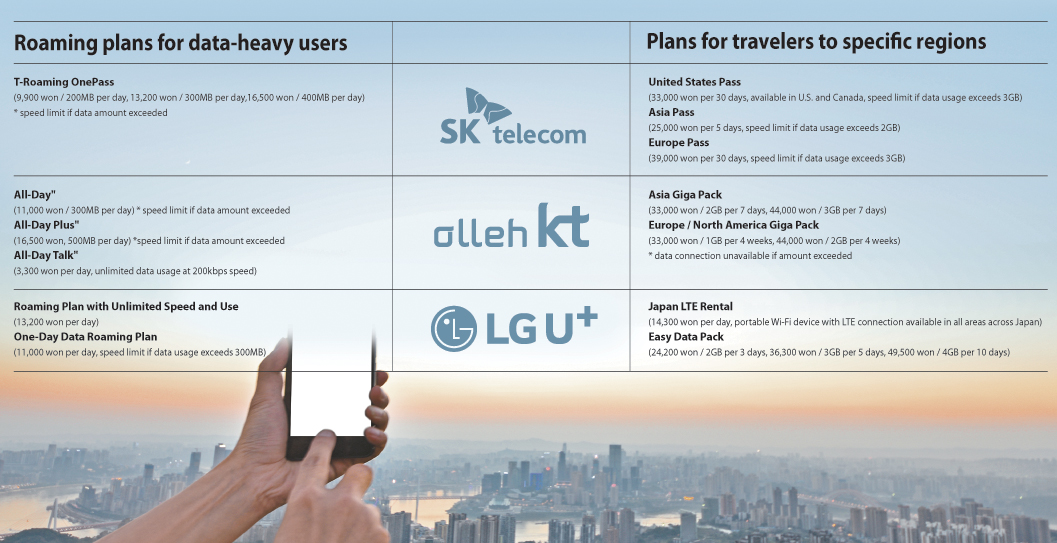 More Koreans than ever before are heading overseas every year. In 2017, 26.4 million people traveled abroad, more than double the figure just one year earlier.

Yet despite the huge popularity of traveling abroad, Korea’s three mobile carriers have failed to increase their overseas roaming revenue - tallying a combined 300 billion won ($268 million) each year for the past two years. Instead of using roaming services, an increasing number of travelers are choosing to purchase foreign SIM-cards at their destination or use phone calls and data through Wi-Fi devices.

In a bid to cash-in on Korea’s wanderlust, telecom companies are scrambling to lower roaming rates and introduce plans customized for popular destinations.

SK Telecom overhauled its roaming call charges in March. Users can now make three minutes of free calls every day, including video calls. The company has also introduced an international flat rate system, meaning the cost of the first 30 minutes of call time is capped at 10,000 won. If a customer calls Korea from Croatia, for example, he would typically be charged 65 won per second. Under SK’s new rate, a 30-minute call that would have cost 117,000 won will only cost 10,000 won.

KT has gone one step further, extending its domestic rate - 1.98 won per second - to calls placed from the United States, China, Japan, Russia and Canada since last month. In the past, people who made calls to Korea from these five countries would have had to pay 24,000 won for a 10 minute call. Now, a 10 minute call costs about 1,200 won.

Until recently, roaming calls were charged per minute. If a user talked for two minutes and a second, he or she should have paid a three-minute bill. However, SK Telecom and KT changed their billing systems since earlier this year and both companies now charge by the second. Although the shift means that users are now paying for the exact amount of time they’ve used, it doesn’t necessarily mean that the rates are better value.

LG U+ was the first carrier to introduce a roaming plan with unlimited data speeds in May. The plan, which costs 13,200 won per day, allows users to enjoy unlimited data in 37 countries including the United States, Japan and Canada.

According to LG U+, the plan will only be available until the end of September. Signing up for this plan and using tethering, which enables external devices to access the Internet through one device, is a good way to save money. When travelling in a group, this would make it possible for one person to join the plan and others to access the Internet through tethering.

The company’s old “One-Day Data Roaming Plan,” which cost 11,000 won per day, allowed for 300 megabytes of high-speed data per day, after which data speed are significantly reduced.

LG U+’s “Talk” plan costs 5,500 won per day with data roaming usage at 200 kilobits per second, but is only available to subscribers who are 19 years old or younger.

KT isn’t the only company to introduce special rates for specific countries.

KT offers an “Asia Giga Pack” for users visiting China and Japan. The pack comes with either 2 or 3 gigabytes of data per week, and is priced at 33,000 won and 44,000 won respectively.

WiFi in your pocket

Renting WiFi devices is also popular, especially among people traveling in a group. The devices, which convert 3G and LTE signals from foreign countries into Wi-Fi signals, can provide an internet connection for up to five people at the same time.

The ‘“Dosirak Wi-Fi” service rents out pocket-sized Wi-Fi access devices for 8,800 won (for U.S. and European travelers) per day.

A growing number of companies are also shipping SIM cards from the U.S., Europe and Asian countries to Korea.

With a foreign SIM card, consumers also cannot answer calls made to their Korean phone numbers. However, if the length of stay abroad is long and roaming costs are likely to be an issue, a domestic SIM card could turn out to be the cheaper option.