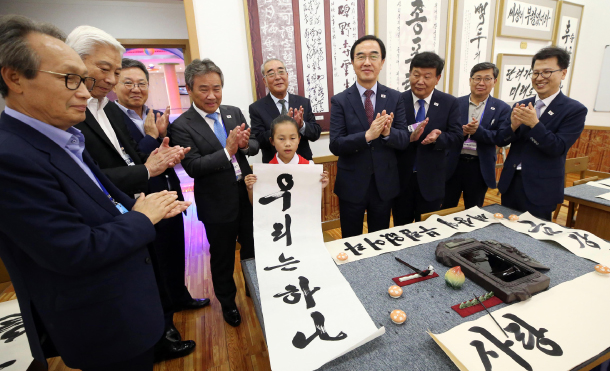 A North Korean girl shows a calligraphy work Friday reading “We are one,” to South Korean Unification Minister Cho Myoung-gyon, center right, who led a sports delegation to Pyongyang. [YONHAP]

North Korea will participate in an international table tennis competition in South Korea later this month, officials from both countries agreed in Pyongyang Friday morning.

South Korea’s Ministry of Culture, Sports and Tourism said the North will send a 25-member delegation to the South, including 16 athletes - eight from each gender - and nine government officials, to participate in the Seamaster 2018 International Table Tennis Federation (ITTF) World Tour Platinum Korea Open, slated to kick off on July 17 in Daejeon and last until July 22.

The North Koreans will arrive on a plane at Incheon International Airport on July 15 and leave on July 23, said the ministry.

The agreement was reached in a meeting attended by five officials from each Korea at the Koryo Hotel in Pyongyang from 11:45 p.m. Thursday to 1:08 a.m. Friday. The South’s side was led by Roh Tae-kang, second vice minister of culture, sports and tourism, while the North was led by Won Kil-u, vice minister of physical culture and sports.

Thomas Weikert, president of the ITTF, said in a statement that it was a “proud moment” for his organization to be able to support another sign of peace on the Korean Peninsula, a move that will serve as the “next chapter of a long history of table tennis diplomacy.” Table tennis, Weikert continued, will once again act as a vehicle for peace.

Both Koreas also agreed Friday that the North will participate in the 52nd International Shooting Sport Federation (ISSF) World Championship, slated for Aug. 31 to Sept. 15 in Changwon, South Gyeongsang.

Pyongyang said it will send a 21-member delegation to the South that will enter through Gimhae, South Gyeongsang, on Aug. 31 and return home on Sept. 15. But the regime has yet to confirm the attendance with the ISSF.

On the follow-up basketball friendlies that both Koreas agreed to hold in South Korea this fall, officials specified that the games won’t be held in September but could take place around the time North Korean musicians hold a concert in the South. The schedules for both events will be ironed out in the future, said the Sports Ministry, based on how they would “contribute to inter-Korean reconciliation.”

South Korea’s basketball delegation returned home Friday afternoon after playing four games with the North. On Wednesday, the two Koreas swapped players and formed two inter-Korean teams that played against each other. One was called “Peace” and the other was called “Prosperity.”

The two countries competed against each other Thursday. The South beat the North in the women’s game 81-74 and the North beat the South 82-70 in the men’s game.