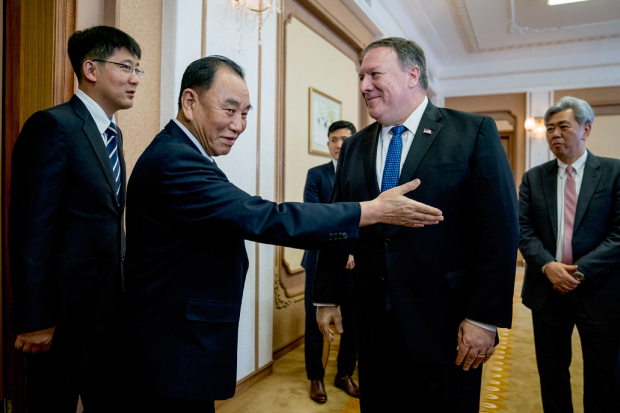 U.S. Secretary of State Mike Pompeo landed in Pyongyang Friday for his first trip to the North Korean capital since President Donald Trump’s landmark summit with Kim Jong-un last month, vowing to nail down the commitments made by both leaders on the North’s denuclearization.

Pompeo arrived at Pyongyang International Airport in the early afternoon and was greeted by North Korea’s Foreign Minister Ri Yong-ho as well as Kim Yong-chol, vice chairman of the ruling Workers’ Party’s Central Committee and director of the committee’s United Front Department, which handles inter-Korean relations and espionage against the South.

Pompeo’s latest trip to the North, his third in this year, comes with the crucial task of ironing out the Sentosa agreement, signed between Kim Jong-un and Trump on June 12 in Singapore, through which the North committed to work toward the “complete denuclearization of the Korean Peninsula.” The agreement failed to explain any process for the North to relinquish its nuclear arsenal, providing fresh fodder for critics who doubt Kim’s sincerity and Trump’s competence.

In comments to reporters on his plane en route to Pyongyang, Pompeo, former chief of the Central Intelligence Agency, said, “Our leaders made commitments at the Singapore summit on the complete denuclearization of North Korea and outlined what a transformed U.S.-DPRK relationship could look like,” according to The Associated Press. DPRK are the initials of North Korea’s official name, the Democratic People’s Republic of Korea.

“On this trip,” Pompeo continued, “I’m seeking to fill in some details on these commitments and continue the momentum towards implementation of what the two leaders promised each other and the world.”

He went on, “I expect that the DPRK is ready to do the same.”

Shortly before his arrival in Pyongyang, Pompeo tweeted that he spoke with Trump while in the air, saying Trump told him he believed Kim saw a “different, brighter future” for the people of North Korea. In another tweet that followed shortly afterward, Pompeo wrote that he looked forward to continuing his meetings with North Korean officials.

“There’s much hard work ahead but peace is worth the effort,” he wrote.

Among Pompeo’s delegation are top North Korean experts in the administration, including Allison Hooker, director for Korean affairs for the White House National Security Council; Andrew Kim, head of the CIA’s Korea Mission Center; and Sung Kim, America’s ambassador to the Philippines and a seasoned negotiator with the North who led working-level meetings between the two countries ahead of the Trump-Kim summit and Pompeo’s latest North Korea visit.

The most recent hint on how the talks might unfold came from Reuters on Thursday, when the agency cited a U.S. official as saying that Pyongyang largely refused to respond to attempts to define the key terms of an eventual denuclearization agreement, including the words “complete, verifiable and irreversible” during U.S.-North talks led by Ambassador Kim and North Korea’s Vice Foreign Minister Choe Son-hui earlier this week.

Faced with a choice to either bend it or break it, the Trump administration decided to shelve its “all or nothing” approach to the North’s denuclearization issue, the report said.

But the State Department denied softening its approach to the North in response to the Reuters article. “Nothing could be further from the truth,” said Heather Nauert, the department’s spokesperson.

Trump told reporters Thursday aboard Air Force One en route to Montana that he “really believes” Kim sees a different future for North Korea, adding, “I hope that’s true. If that’s not true, we’ll go back to the other way.”