Paik Seung-ho should be fighting fit for the Asian Games

Paik Seung-ho should be fighting fit for the Asian Games

Korean football prospect Paik Seung-ho should be ready for the Asian Games next month despite his recent hamstring injury, his father confirmed on Friday. 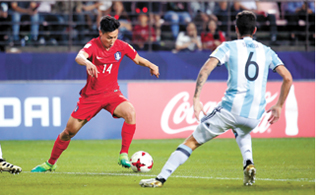 Paik Seung-ho, in red, dribbles the ball during Korea’s Group A match against Argentina at the 2017 FIFA U-20 World Cup at Jeonju World Cup Stadium in North Jeolla in May 2017. [YONHAP]

Professor Paik Il-young, who teaches in the department of physical education at Yonsei University in Seoul, denied an earlier report that the 21-year-old attacker was likely to miss the Aug. 18-Sept. 2 Asian Games with a left hamstring injury.

“Seung-ho suffered a minor injury during a scrimmage in Indonesia on June 19,” the senior Paik said. “He returned home immediately for further tests, and the diagnosis was he’d be out of action for four weeks. He’s already done two weeks of rehabbing, and he can do some light jogging. He’ll be able to participate in the Asian Games.”

The men’s football tournament in the Asian Games is open to players under 23, and Paik, an FC Barcelona youth product who spent this past season with the reserve team for La Liga’s Girona FC, is considered a key piece.

Paik should be a shoo-in as long as he’s healthy, and he will likely be joined by a couple of under-23 stars who competed at the FIFA World Cup in Russia last month: 20-year-old midfielder Lee Seung-woo, another former FC Barcelona prospect, and 22-year-old forward Hwang Hee-chan, already an accomplished pro with FC Red Bull Salzburg.

Paik’s most notable performances have been with Team Korea in the U-20 World Cup. Along with his former Barcelona teammate Lee, the two led the U-20 team to a second-place finish in group matches and helped Korea become the first team to advance to the round of 16.

Although Korea made an early exit from the round, losing to Portugal 3-1, Paik and Lee managed to hold the attention of local fans and scouts from European leagues. Throughout the U-20 World Cup, Paik managed to score three goals for Korea.

After the U-20 World Cup, Paik left the FC Barcelona B team despite having a year left on his contract, under mutual consent, to sign a three-year deal with Girona FC in August 2017 to start his season in the club’s third-tier Segunda Division B team.

Each team is permitted to name up to three players over the age limit as “wild cards.” Tottenham Hotspur attacker Son Heung-min, who turned 26 on Sunday, is likely to be one of the three over-age players. A gold medal at the Asian Games will be Son’s last chance to earn a military service exemption. During the 2018 FIFA World Cup in Russia, Son scored two goals for Korea throughout the three group matches against Sweden, Mexico and Germany. Son wore the captain’s armband during Korea’s last match, against Germany, as Ki Sung-yueng was out due to an injury.

Korea won the 2014 Asian Games gold medal over North Korea in extra time. In this year’s Asian Games, Korea has been paired with Kyrgyzstan, Malaysia and Bahrain in Group E.

There are six groups of four nations in the men’s tournament. The top two nations from those six groups, plus the four best third-seeded teams, will reach the round of 16.

The Asian Games’ opening ceremony will be held on Aug. 18 and the men’s group stage will begin on Aug. 14.