Drunkenness is no excuse

Drunkenness is no excuse

KIM JUN-HEE
*The author is a national news reporter of the JoongAng Ilbo. 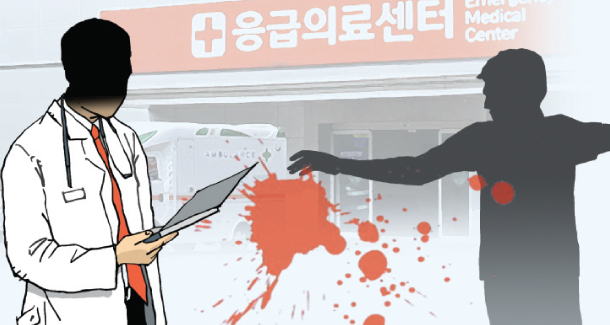 A man elbowed the face of a man in a white coat. The victim fell to the ground, and the assaulter took him by the hair and kicked his face.
This is not a scene from WWE or mixed martial arts. At 9:30 pm on July 1, a patient assaulted a doctor in the emergency room of a hospital in Iksan, North Jeolla Province. The violence was caught by CCTV.

The assaulter was a 46-year-old man identified as Im, who visited the hospital because of a broken finger. He was drunk and had fallen. The victim was a 37-year-old Doctor Lee, head of the ER. Dr. Lee’s nose was broken. When Im sobered up, he said he was sorry to the doctor. However, Dr. Lee was still disturbed. Im was detained by police on the scene, and an arrest warrant was requested on an assault charge on July 5.

Drunken people are dangerous. The National Police Agency’s 2016 statistics showed that 40 percent of people charged with murder, or 390 of 995, were drunk at the time. In May, 51-year-old Kang Yeon-hee, a 119 rescue responder from the Iksan Fire Station, passed away a month after she was beaten by a drunk man she had saved.

The Korean Society of Emergency Medicine and the Korean Medical Association urged strict law enforcement on the assaulter after the ER incident. Interfering with rescue and emergency activities is subject to imprisonment of up to five years and a fine of up to 50 million won under the current law, but in reality, violence in ERs occurs frequently.

Many people argue that the practice of reducing sentences for intoxicated persons should be abolished. 210,000 people signed a petition posted on the Blue House website in December.

Blue House Secretary of Civil Affairs Cho Kuk responded that a legislative discussion to exclude influence of alcohol from the states of mental disability would be necessary. The Korean Medical Association argued that assaulting medical professionals would harm people’s right to medical services.

Doctors and the 119 emergency responders are the final bastion defending citizens’ lives. When they fall, the citizens are put in greater danger. Violence under the influence of alcohol must be strictly punished. In addition to strengthened punishments, placing police or security guards in emergency rooms may be considered. It is important to strictly punish crimes after incidents, but it is better for both doctors and patients to make hospitals safe places first.