Can cabbies and carpoolers ever be friends?

Can cabbies and carpoolers ever be friends? 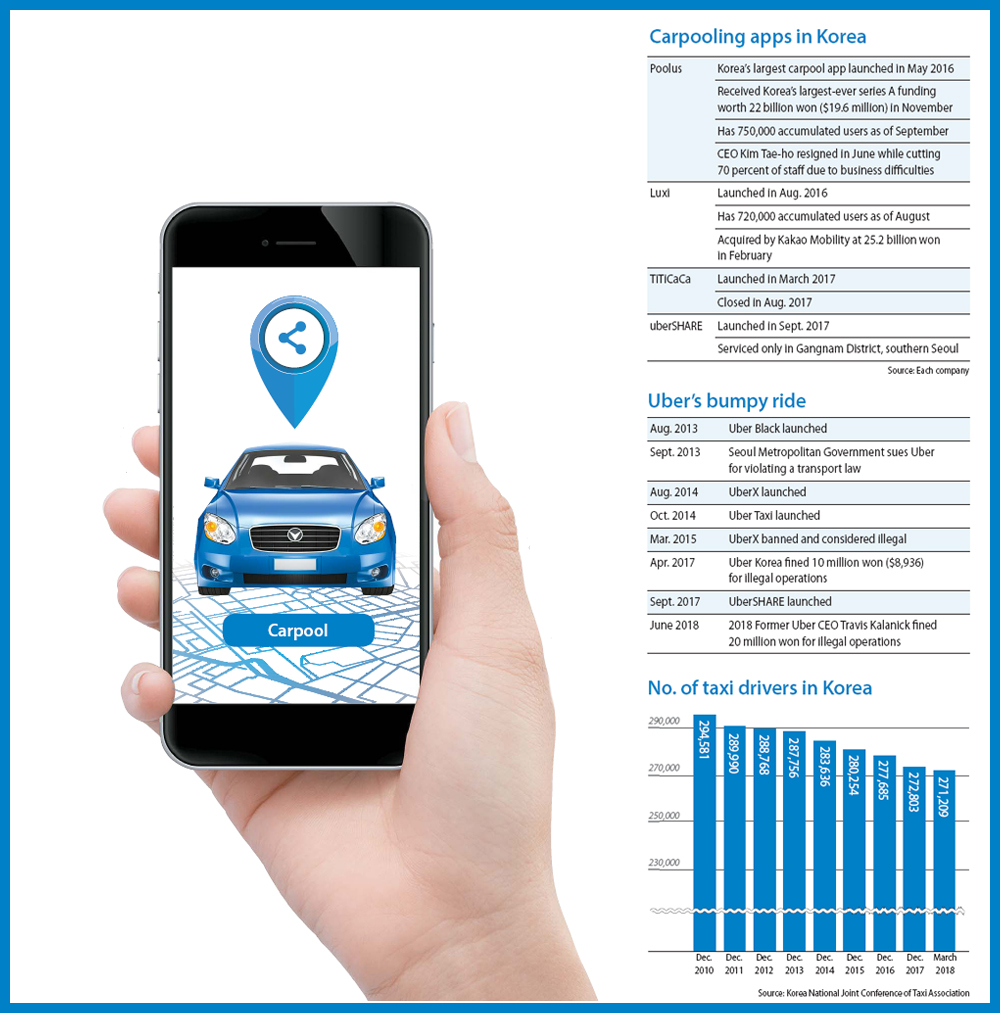 The carpooling world was rocked last month when the largest player Poolus fired 70 percent of its staff and its CEO Kim Tae-ho stepped down, leaving smaller competitors uncertain about the industry’s future.

In a country where peer-to-peer ride-hailing models like UberX are illegal, the homegrown app has represented a possible future for Korea’s burgeoning mobility-as-a-service industry since it was founded in 2016. Poolus avoids the Uber trap by exploiting a loophole in the local transport business law.

According to article 81 of the Passenger Transport Service Act, personal vehicles cannot be exploited for business purposes. But carpooling during commuting hours is an exception.

Poolus used this loophole to offer a carpooling service that was very specifically timed to fit within commuting hours. Things quickly went wrong when the start-up attempted to expand its service.

After Poolus announced it would let drivers decide which four hours in the morning and evening constituted their commuting hours, considering the increasingly common and flexible working hours, taxi operators argued that the start-up was attempting to operate a 24-hour ride-hailing service. The Seoul Metropolitan Government stepped in and asked the police to investigate the legality of the move.

Many industry insiders - especially those in the tech sector - consider Poolus’ downsizing to be a huge loss for Korea in an era of digitization and have criticized the outdated regulations and opposition from taxi drivers as standing in the way of progress.

However, the government and taxi drivers are still hesitant to embrace the peer-to-peer ride-hailing model that can disrupt the established transportation landscape in the country. 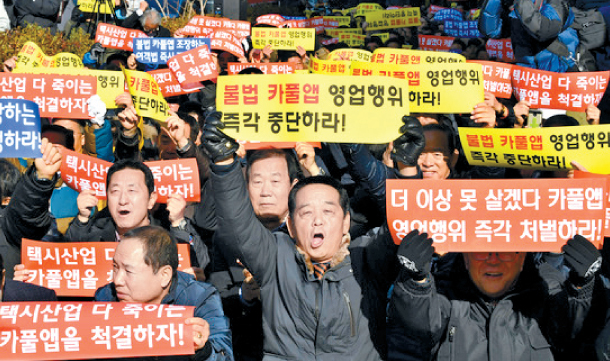 A 58-year-old corporate taxi driver in Seoul surnamed Kim has been working in the industry for roughly 10 years. He is infuriated by how easily drivers using carpool apps can jump into the transportation business.

“We go through certain tests to earn a business license and I have to turn in 150,000 won ($134) from my daily earnings to my taxi company,” Kim said. “Our license ties us to a lot of business guidelines, but carpool drivers are unrestricted.”

According to Kim, corporate-hired taxi drivers work according to a 12-hour daily shift and private-owned taxi drivers - people operating business with their own car with a business plate purchased for roughly 100 million won - are required to rest once every three to four days in an attempt to control the oversupply of taxis. Carpool drivers are not limited by this restriction, allowing them to work whenever they want.

“Carpool drivers can also pick up multiple customers during a single trip, but taxi drivers are not allowed to do so,” Kim added.

Another problem caused by the lack of regulations controlling carpool drivers is that no one can guarantee the safety of passengers, according to a director from the Korea National Joint Conference of Taxi Association, a group representing over 100,000 corporate taxi drivers nationwide, who declined to be named.

“Frankly, we don’t know if the drivers have criminal records,” the director said.

According to the Ministry of Land, Infrastructure and Transport, registered taxi drivers are checked every month in case their criminal record or any other conditions relevant to stripping them of their business license have changed.

The official from the taxi association also argued that it is unreasonable to say that the taxi industry is blocking Korea from technological advances, comparing the situation to other Southeast Asian countries that already have established ride-hailing services like Grab.

“There are reasons why Grab works in Southeast Asian countries,” the director said. “Taxis there weren’t very reliable in the first place, especially for tourists that are not acquainted with the local pricing system, which makes ride-hailing apps that give some information about drivers and pricing more reliable.”

According to a researcher at the state-run Korea Transport Institute, who also declined to be named, it does make it difficult for a country like Korea, where public transportation systems like buses, subways and taxis are already well established and tightly managed by the government, to make an ambitious change to existing transport regulations.

“It’s not only about taxi drivers’ interests,” the researcher said. “Deregulation [to allow ride-hailing apps] could disrupt the whole public transportation system in the country and so regulators have to be careful.”

Start-ups like Uber and Poolus have never said that they want to kill the taxi industry, but all around the world, taxi drivers felt that their livelihood was threatened by how readily the service was picked up, especially by young people.

Despite safety concerns related to the ride-hailing app drivers - and there have been a number of assault and sexual assault cases reported in other countries, especially in the services’ early days - these apps continue to grow because they tend to offer rates that are at least 30 percent cheaper than taxis and are often more readily available.

A 30-year-old office worker surnamed Han who lives in Eunpyeong District in northern Seoul and works in Gwacheon in Gyeonggi often uses Poolus to go home when he drinks with his colleagues after work.

“Grabbing a cab is almost impossible around midnight, especially since I live in northern Seoul, which is not a very popular destination for taxi drivers compared to the posh Gangnam area,” Han said. “Carpooling apps are also more affordable.”

According to Han, office workers that try to hail a taxi on the streets after midnight when demand is high are acutely aware of the need for ride-hailing or carpooling apps.

So why can’t taxi drivers and carpool drivers work side-by-side?

Kakao Mobility, which operates the country’s dominant taxi-hailing app KakaoTaxi, actually attempted to do just that, acquiring Korea’s country’s second largest carpool app Luxi for 25.2 billion won in February with the intention of integrating it into the existing taxi-hailing service.

KakaoTaxi is the only on-demand transport app that is widely accepted and used by taxi drivers in Korea. As of the end of last year, 240,000 taxi drivers out of total 270,000 nationwide used the app with 18 million customers subscribed.

Kakao’s mobility business spin-off made sure to note that the carpool service will only be used to cover shortages at peak hours and that it will offer the service “within the legal boundaries” in a statement. Currently, carpool apps are only allowed to operate from 5 a.m. through 11 a.m. and from 5 p.m. through 2 a.m. - widely considered commuting hours.

Despite the explanation, Kakao was immediately attacked by taxi drivers for attempting to “compromise the benefits to taxi drivers by operating a carpool service.”

Both Kakao and Luxi are still working on how to come up with an acceptable business model that serves both customers and existing taxi drivers relying on KakaoTaxi for their livelihood, according to a Kakao Mobility spokesperson.

“I really think there are ways for taxis and carpool drivers to coexist,” says Lim Jung-wook, the managing director of Startup Alliance Korea, a private-public network dedicated to supporting Korean start-ups attempting to go global.

According to Lim, if traffic networking platforms can find ways for taxi drivers to work more efficiently and flexibly while tightening the screening process of its own drivers, a coexisting model could work.

“There are countries and cities amending regulations to reflect the changing market environment,” Lim said. “It’s an irreversible trend in the transport industry, just like we cannot go back to a time when we didn’t use smartphones.”

Last month, Uber won an appeal in London to regain its taxi license for the next 15 months after agreeing to stricter government oversight.

In turn for the license, Uber’s new CEO Dara Khosrowshahi, agreed to report incidents to the police directly rather than transport authorities, make six hours rest mandatory for drivers after 10 hours of operation and share traffic data with the city. It was a sign that Uber is beginning to take local regulations seriously in order to make its business sustainable.

A more inclusive model that could boost “coexistence” is UberFlash, currently being trialed in Singapore, according to researcher Kang Seo-jin from KB Financial Group.

The service was launched in January as a partnership between Uber and Singapore’s largest taxi operator ComfortDelGro. UberFlash pairs passengers with either an UberX car or a taxi depending on which is closest.

The model may well be one that KakaoTaxi is considering as the Korean app already has access to both taxi and carpool drivers, although whether the model is successful remains to be seen.

UberFlash operates on a 5 to 10 percent cheaper fare than UberX. Such a low fare has been a burden on taxi drivers, although they are able to connect with passengers faster by using the service.

There are also attempts to regulate ride-hailing app drivers.

Singapore’s Land Transport Authority introduced the Private Hire Car Driver’s Vocational License in July 2017, mandating drivers hoping to use their personal vehicle to transport paying customers to obtain the license by attending training programs and a criminal record screening. People with a record of sexual assault or murder cannot obtain the license at all.

In Malaysia, where Southeast Asia’s largest ride-hailing app Grab is legal, the country introduced a Taxi Industry Transformation Program in 2016 to level the playing field for taxi drivers.

Under the program, the country’s Land Public Transport Commission mandated vehicles providing ride-hailing services to comply with compulsory road worthiness inspections and relaxed taxi vehicle regulations so that taxi drivers could choose from a wider range of vehicles. It also said it will impose a stringent pre-screening process to improve the quality of taxi drivers and ride-hailing drivers.

“It is not easy to directly implement another city’s model in Korea, considering the different transportation infrastructure,” said Lim Seo-hyun, a researcher for the Korea Transport Institute, in a report November. “However, to verify the validity of various future mobility business models in Korea, the country needs to offer an opportunity for start-ups to at least test their services.”

While discussions on deregulation are stuck in limbo and carpooling apps make little progress with their business, conglomerates like Samsung, Hyundai Motor and SK have been aggressively investing in foreign ride-hailing and peer-to-peer car sharing companies.

“Korea has reason to be concerned of deregulation, but it still needs to hurry up,” Lim from the Startup Alliance said. “Regulators need to understand that ride-hailing businesses are at the center of disruption in the transportation industry.”

All three conglomerates have invested in or joined partnerships with Southeast Asian ride-hailing company Grab. SK also has a stake in U.S. peer-to-peer car sharing company Turo. Most recently, on July 4, Hyundai Motor landed a partnership with Sydney-based car sharing start-up Car Next Door with the aim of launching a new app-based mobility service in Australia by 2020. Lim says the investment is because they know platform providers will become major customers of driverless cars, which will be a much bigger market in the future.

“But right now in Korea, these conglomerates have nobody to invest in,” Lim added.

Industry experts say that if the government does not foster mobility start-ups now, deregulation in the distant future will only benefit foreign operators.

In Asia, Uber has been losing to local apps like Didi Chuxing in China, Grab in Southeast Asia and Ola Cabs in India, according to Kang from KB Financial Group.