In this job market it pays to be in your 50s

In this job market it pays to be in your 50s 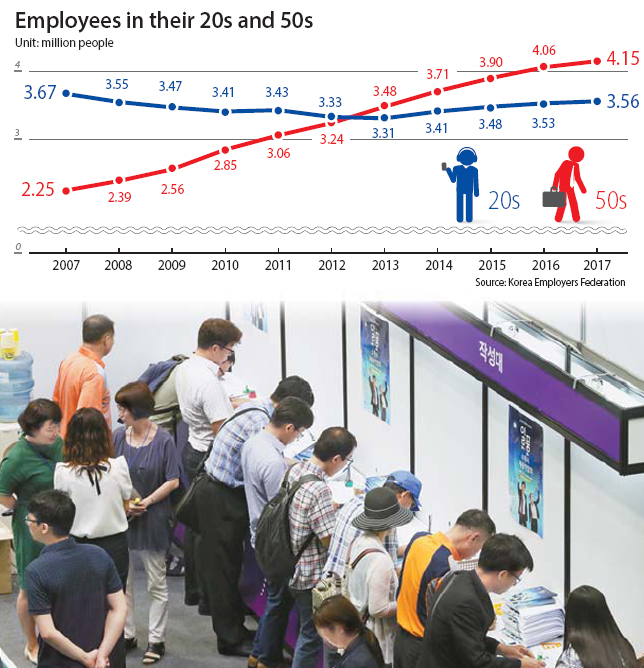 Job seekers look for information at a job fair held this month at the Suwon Gymnasium in Gyeonggi. [YONHAP]

Over the last decade the domestic labor market has benefited older employees, who have typically been able to find more and better jobs, at the expense of younger workers in their 20s, who have been left with less employment opportunities and smaller paychecks.

A report from the Korea Employers Federation (KEF) on Sunday compared the jobs of Koreans in their 20s and 50s between 2007 and 2017. The results showed that the quantity and quality of jobs had improved for employees in their 50s, whereas the situation for those in their 20s was considerably less positive.

Koreans now in their 50s are part of Korea’s baby boomer generation, whereas those in their 20s are from a generation in which families generally stopped having more than two kids.

But still, the report showed that even considering this demographic difference the younger generation is having a much more difficult time finding jobs. The portion of Korea’s population made up of people in their 20s decreased by 2.2 percentage points between 2007 and 2017, but the decline of this age group’s share in the job market fell steeply, by 5.2 percentage points.

On the other hand, the portion of paid 50?something employees in the job market increased 6.7 percentage points to reach 20.9 percent, while their share of the overall population grew more slowly, at 3.8 percentage points.

There were a number of indicators that the quality of jobs for people in their 20s weren’t great either.

More people in their 50s held permanent positions than 10 years ago - 66.2 percent had stable jobs, an increase of 8.9 percentage points.

Among people in their 20s, it was more common to see temporary jobs - 32.8 percent had temporary roles, an increase of 1.6 percentage points from 2007.