Moon to meet Samsung’s Lee at event on India trip

Moon to meet Samsung’s Lee at event on India trip 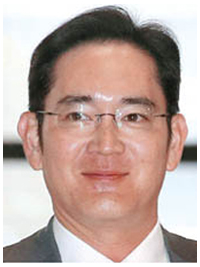 President Moon Jae-in and Lee Jae-yong, the third-generation leader of Korea’s largest conglomerate, will meet for the first time today at a completion ceremony for Samsung Electronics’ new smartphone factory in India.

Samsung Electronics Vice Chairman Lee departed on a plane to New Delhi from Gimpo International Airport on Sunday morning. This is his fourth business trip abroad after being released from jail in February to appeal bribery convictions and the first time Lee will grace a public event. On the three prior business trips abroad, Lee stayed away from the public.

The expansion, in which Samsung invested 40 billion rupees ($581 million), was decided by Lee in 2016 after a face-to-face meeting with India’s Prime Minister Narendra Modi.

On Sunday afternoon, President Moon embarked on a six-day tour to India and Singapore with a large delegation of government officials and business leaders from over 100 companies. Samsung Electronics Vice Chairman Yoon Boo-keun is also in the group. Moon’s visit to Samsung’s celebration ceremony is part of his official schedule.

Lee will reportedly guide Moon at the event and talk about the company’s smartphone business and investment plans in India in front of top officials from both countries. Samsung did not confirm this, saying it does not disclose details of Lee’s business trips.

It will be the first face-to-face meeting of Moon and Lee. Lee couldn’t attend Moon’s causal dinner with corporate heads in July 2017 because he was in prison while being tried for having offered bribes to former president Park Geun-hye and her friend Choi Soon-sil. During his term, Moon has made visits to facilities of conglomerates like Hyundai Motor and LG Group but not Samsung.