Pyongyang was unhappy with Pompeo

Pyongyang was unhappy with Pompeo 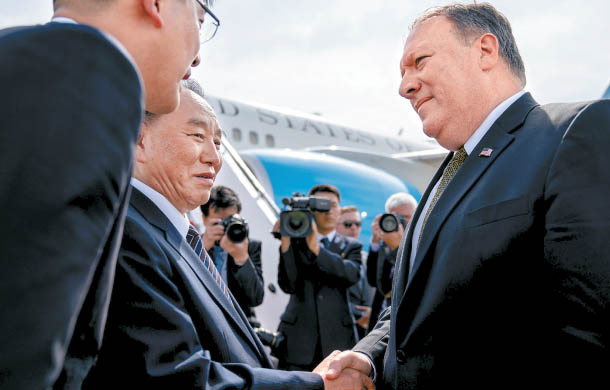 Pyongyang called the high-level meetings between its officials and U.S. Secretary of State Mike Pompeo “so regretful” Saturday, threatening to renege on its agreement to denuclearize unless Washington refrains from pressuring the regime with “unilateral and gangster-like” demands.

A lengthy statement issued by an unnamed spokesman for the North’s Foreign Affairs Ministry was published by the state-run Korean Central News Agency (KCNA) shortly after Pompeo left Pyongyang.

Pompeo arrived in the North Korean capital on Friday for his first trip to the North since U.S. President Donald Trump’s landmark summit with Kim Jong-un last month, vowing to nail down the commitments made by both leaders on denuclearization.

Pompeo’s trip, his third in this year, apparently did not go well.

“The results of the talks can’t be but so apprehensive,” an English version of the KCNA report read. “The first DPRK-U.S. high-level talks this time brought us in a dangerous situation where we may be shaken in our unshakable will for denuclearization.” DPRK are the initials of the North’s official name, the Democratic People’s Republic of Korea.

It appears the U.S. “misunderstood our goodwill and patience,” the North warned.

The regime castigated the U.S. for pressuring the regime to comply with complete, verifiable and irreversible denuclearization, also known as CVID, without ever mentioning the establishment of a peace regime on the Korean Peninsula, an indication that both countries had different priorities entering the high-level talks.

Pyongyang said Washington threatened to “backtrack” on the issue of establishing a peace regime “under certain conditions and excuses.” The regime insisted that a declaration ending the 1950-53 Korean War, which ended in an armistice, not a peace treaty, was the “first process” of defusing tension and establishing a lasting peace regime on the peninsula.

For the U.S. to press CVID only “disrupts” bilateral talks, stokes “distrust” and increases the danger of war, the North continued, adding that a “step-by-step approach” and following the “principle of simultaneous actions” was needed to denuclearize the Korean Peninsula.

The KCNA article read that the North expected the U.S. would bring a “constructive proposal” meant to help build mutual trust, which the regime was planning to respond to by “doing something” that “corresponds with it.” That apparently did not happen.

Kim was said to have sent a personal letter to Trump, which Kim Yong-chol, vice chairman of the Workers’ Party’s Central Committee, relayed to Pompeo. The leader reportedly expressed his “sentiments of good faith” built towards Trump during their June 12 summit and said mutual dialogue will be consolidated through future meetings.

Distancing itself from angry statements made against the U.S. in the past, the North said it still cherished “good faith” towards Trump and called on Washington to change its attitude.

Pompeo, on the other hand, struck a positive tone while briefing reporters Saturday on the meetings, saying he had “very productive” and “good-faith” conversations with North Korean officials.

“These are complicated issues, but we made progress on almost all of the central issues,” said Pompeo. “Some places a great deal of progress, other places there’s still more work to be done,” he continued.

Pompeo said a meeting between both countries on the repatriation of American soldiers’ remains will be held on Thursday in the truce village of Panmunjom, although the date could be moved by a day or two.

Pompeo said he talked with North Korean officials on how the regime would destroy the missile engine testing facility Kim Jong-un said he would during the summit, and “laid out a path” for future working-level negotiations to continue dialogue on the discussions made last week.

Asked whether he got any closer to a sense of a timeline for the North’s denuclearization and a baseline declaration of their weapons of mass destruction, Pompeo replied that both sides spent a “good deal of time talking about each of those two things,” adding progress was made in “every element of our discussions.”