Nest of red fire ants in Incheon included a queen

Nest of red fire ants in Incheon included a queen 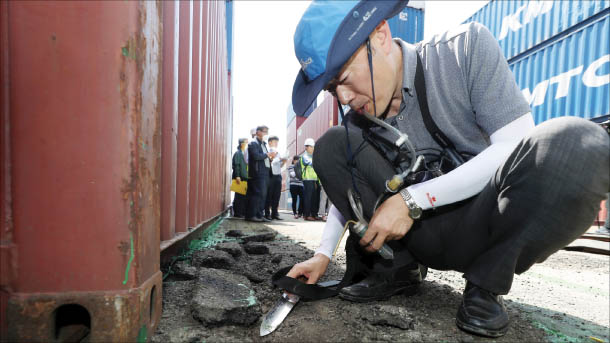 Quarantine officials rummage through a container yard in Incheon Port on Saturday. The Ministry of Agriculture, Food and Rural Affairs said Saturday that they found a tropical red fire ant queen, 16 larvae and some 6,100 worker ants in Incheon Port. [YONHAP]

A red fire ant queen was found at the Incheon Port on Saturday, the Ministry of Agriculture, Food and Rural Affairs said, a confirmation that the scary red fire ants have reproduced in Korea at least once. 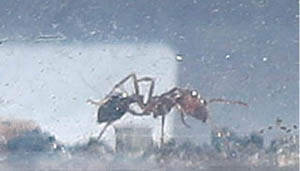 The Animal and Plant Quarantine Agency of the ministry announced on Saturday that it found a queen, 16 larvae and some 6,100 worker ants of the Solenopsis invicta species at the Incheon Port’s storage yard for cargo containers.

Solenopsis invicta, or red fire ants, range in size from 2 to 6 millimeters (0.08 to 0.24 inches) and are found in 26 countries, including Australia, China and the United States. Their stings can cause a burning sensation and lead to itchy sores. People with allergic reactions to the venom can go into life-threatening shock.

Over 80,000 cases of red fire ant bites are reported each year in the United States. Around 100 of them result in deaths.

This was the sixth sighting of the red fire ants in Korea by the quarantine authorities since the first at in Busan Port in September 2017.

In all five previous discoveries, authorities did not find a queen and made the tentative conclusion that the ants found were imported, rather than a result of a reproduction cycle that took place within Korea.

Red fire ants reproduce by having a nuptial flight, the phase in the reproduction cycle where virgin female ants, or princess ants, mate with male ants in mid-flight and then land to start a new colony.

Only fecund and healthy female ants are able to reach this stage, since they have to fly up to 200 meters in the air while mating. This allows ant colonies to proliferate up to several kilometers away.

A princess ant loses her wings once she successfully reproduces, becoming a queen.

Quarantine authorities did not find princess ants with the queen at the Incheon Port.

“Because we did not find princess ants with the queen, we think the possibility of having a colony spurred from this group is quite low,” an official of the Animal and Plant Quarantine Agency told the JoongAng Ilbo.

But princess ants were sighted in one nest found in Busan on June 20. The nest had over 3,000 worker ants and 150 eggs, and 11 winged female ants. Authorities said they found no traces of other nests in the area.

After this sighting in Busan, quarantine authorities began to physically open up some of the cargo containers that land in Korea, though they are physically capable of inspecting only around 5 percent of all cargo containers due to the sheer volume of trade that comes through the country’s ports.

For 95 percent of the cargo containers, the authorities rely on voluntary reporting of infestations by cargo owners.

“We have some 13 million cargo containers coming into the country every year,” an official of the Animal and Plant Quarantine Agency told the JoongAng Ilbo. “It’s not possible to open up every single one of these cargo containers.”