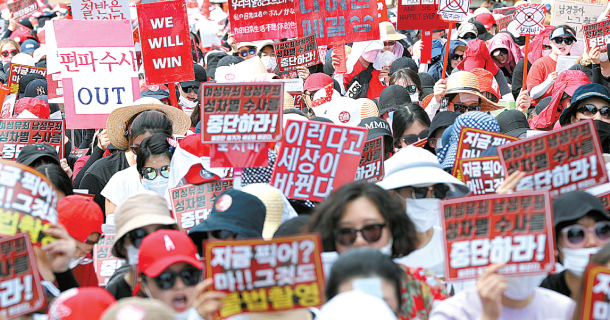 Some 19,000 women gathered at Hyehwa Station in central Seoul on Saturday in what was one of the biggest rallies by women in Seoul recently. They protest specifically against the use of hidden cameras on women. [NEWS1]

Some 19,000 women gathered at Hyehwa Station in central Seoul on Saturday, one of the biggest women-only rallies in Seoul ever.

“I will not give into the stereotypes the society has created about women,” said a woman on a stage near Hyehwa Station in central Seoul on Saturday. She shaved off her hair in public, an act that symbolizes feminist defiance.

The rally on Saturday was specifically protesting the custom of men using hidden cameras to spy on women. According to authorities, there were 5,185 criminal cases involving use of hidden cameras in 2016, the latest year that data is available. That number more than tripled since 2011, when there were 1,523 cases.

Hidden cameras have been found in public bathrooms, shower stalls of swimming pools and even motels. In many of the cases that police investigated, the images and videos have appeared online in forums or on pornographic websites.

The organizers of the rally at Hyehwa Station, who are members of an online community at Daum, an internet portal, said 60,000 women took part in it, though police put the number at 19,000. The organizers circled the area to stop men from entering the protest or taking photos of the rally with their cellphones.

“We have been suffering under the fear that we could be the next victim of illegal use of hidden cameras,” an organizer announced at the rally. “There is the additional fear that the laws will not be able to protect us when we fall victim to these Peeping Toms.”

Women at the rally held pickets that read, “Don’t turn my daily life into pornography” and, “We are making history. Remember us.”

The rally on Saturday was the third organized by the group since its first on May 19 and the largest gathering of female protestors in Seoul lately.

A group of topless women drew attention by protesting outside Facebook Korea’s headquarters in Gangnam District, southern Seoul, on June 2, after Facebook removed photos of the group’s May 26 “Free the Nipple” event, when women participated at a topless event organized by a feminist group, Fire Femi Action.

Various rallies of women calling for women’s rights have been held in Seoul since.

Also held on Saturday in central Seoul was a rally calling for the decriminalization of abortion in Korea.

“Abolish criminalization of abortion,” read signs held by thousands of protestors who gathered in Gwanghwamun Square. Around 5,000 people took part in the rally organized by 16 feminist organizations. They marched from the square toward the Constitutional Court.

The ban on abortion in Korea is being reviewed by the Constitutional Court for its legality. Given that six of the court’s current justices have gone on record advocating a change in the ban - the number required for its overruling - the ban is likely to be scrapped or modified, though some analysts have pointed out that the court generally makes conservative decisions.

In August 2012, the Constitutional Court upheld the criminalization of abortion after a four-to-four tie.

The rallies organized by feminist groups in Seoul lately have gained attention for the growing number of participants.

“There is a new movement going on here at the rally in Hyehwa Station,” a senior-ranking police officer told the JoongAng Ilbo Saturday. “Usually, the organizers would report before the rallies their expected number of participants. But the number of the actual turnout has been higher than expected each time.”

“I think the rising number of participants at the rallies for women’s rights shows the bottled up anger women have felt in being victimized in public spaces,” an organizer of the rallies against hidden cameras told the JoongAng Ilbo. “I think any woman in Korea would have checked at least once if they are being watched by hidden cameras in public spaces. Many women also share the experience of being the victims of sex crimes at work. But we have all been taught to think that somehow, we are the reason for these crimes committed against us, that it’s our fault. More women are taking part in the movement because they’ve realized that only women can truly stand up for women.”

The group’s next rally is scheduled for Aug. 4 in Gwanghwamun Square in central Seoul.

Some characterized the growing rallies for women’s rights in as part of a new type of feminism in Korea.

“I’ve been part of it for some three to four years,” a 29-year-old office worker surnamed Yoon told the JoongAng Ilbo. “I started openly protesting verbal abuse against women by posting on Twitter and I was joined by more users over time standing up for women in online spaces.”

Yoon said it was the murder of a 23-year-old woman in 2016 that brought the online feminism movement onto the streets. The woman was stabbed to death by a stranger in a bathroom near Gangnam Station in May 2016 and thousands visited public-led mourning sites set up around the nation and held rallies condemning the murderer as a misogynist. The killer announced that he killed the victim because he felt that women in general looked down on him.

“After the Gangnam Station case, and after the Me Too movement here, more women came to identify with the feminism movement,” Yoon said.

Some criticized the language used by some female protestors about men.

“Policemen are also men-sects,” some women called out at the rally at Hyehwa Station on Saturday, using the term coined by some online users who call themselves feminists, a portmanteau for “men” and “insects.”

“It’s part of mirroring the language used by men against women,” an organizer of the rally told the JoongAng Ilbo. “These mirroring effect should subside once the terms some men use against women disappear from society. Feminism is a movement to oppose gender-based discrimination against women, it’s not a movement against men.”