Choo Shin-soo of the Texas Rangers broke the franchise’s on-base record for a single season on Sunday after extending his streak to 47 games. 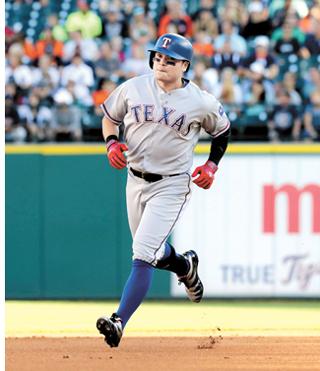 Choo Shin-soo of the Texas Rangers rounds the bases after hitting a solo home run during a game against the Detroit Tigers at Comerica Park in Detroit on Friday. [AP/YONHAP]

In his final at-bat in the ninth inning against the Detroit Tigers, Choo hit an infield single off reliever Victor Alcantara in the ninth inning in the Rangers’ 3-0 win at Comerica Park in Detroit to set a franchise record. The last longest streak belonged to Julio Franco, who reached base in 46 consecutive games in 1993.

Choo, the Rangers’ designated hitter, reached the historic mark almost miraculously. He was 0-for-4 leading up to the at-bat, and he came to the plate with two outs in the top of the ninth inning. He earned his fifth at-bat after Ronald Guzman singled in front of him with one out.

After Carlos Tocci struck out, Choo hit a grounder to Jeimer Candelario, but since the Tigers’ third baseman didn’t attempt a throw, Choo was able to reach first base.

“These kinds of records, it’s a gift,” Choo told MLB.com after the game. “I still believed I would get another at-bat. I know I made the last out in the seventh inning, but I believe in our lineup, so I thought I had a good chance to get another at-bat.”

Choo has been on base in every game since May 13. It is the longest active streak in Major League Baseball and also the longest of Choo’s career. During the stretch, he’s had a batting average of .339 and a .470 on-base percentage.

Among active players in the MLB, Joey Votto of the Cincinnati Reds and Albert Pujols are the current record holders with a 48-game streak. Choo will now chase their numbers as well as the Rangers’ overall on-base record of 58 games set by Will Clark over the 1995 and 1996 seasons. The all-time MLB record is held by Ted Williams, who reached base in 84 consecutive games in 1949.

In addition to his on-base record, Choo will play in the MLB’s All-Star Game for the first time in his career, news that he found out on Sunday. The annual competition pits the American League against the National League, and each team comprises 32 players.

“Before the game, [manager] Jeff Banister called a team meeting and called out my name as an All-Star,” Choo told MLB.com. “I was joking around, I said, ‘I need four days off before the second half.’ That aside, I got goose bumps. When I came from Korea to play in the big leagues, my goal was to be one of the best players. This is one of the best days of my life. I am going to enjoy this with my family.”

“I know Korean pitchers have made the All-Star Game but first position player - very special for me and my country and my family, too,” Choo told MLB.com. “I am very excited. I can’t wait.”

At 35, Choo is enjoying one of the most productive seasons at the plate. Before setting the on-base record, Choo already achieved one record in the MLB: he has hit the most home runs among Asian players in major league history, exceeding Hideki Matsui’s 175. He has been continuously extending his own record and now has a total of 185 home runs throughout his major league career.

“I was wishing before the end of my career that I would make an All-Star Game,” Choo told MLB.com. “It’s not easy to do - a lot of good players on 30 teams.”

The All-Star Game will take place next Tuesday at Nationals Park in Washington.