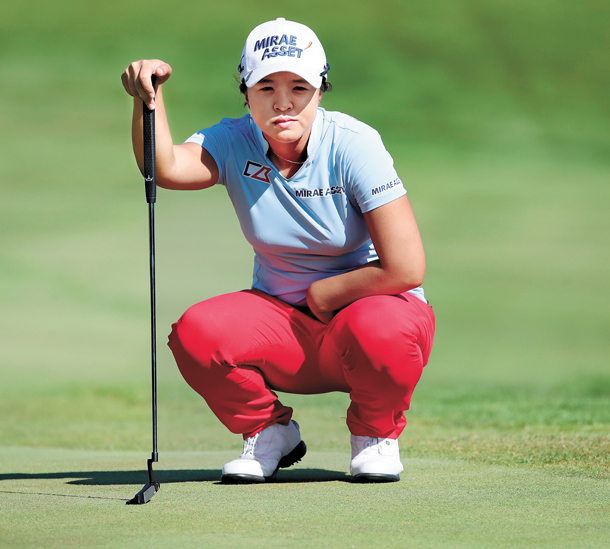 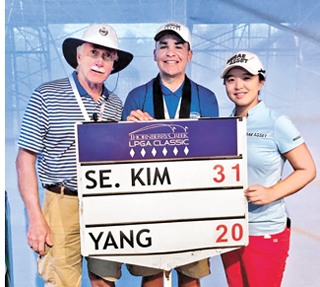 Kim Sei-young, right, poses with the standard bearers sign after the final round of the Thornberry Creek LPGA Classic on Sunday. [LPGA SCREEN CAPTURE]

With another bogey-free round of seven under par, 65, Kim finished the tournament at 31 under par, 257, finishing nine shots ahead of runner up Carlota Ciganda of Spain.

Kim, who started the final round with an eight-shot lead, once again started the course strong, kicking off with a birdie on the first hole. Then, she added three more in the front nine alone, raising expectations that she may be able to surpass the Tour’s 72-hole record held by herself and Annika Sorenstam of Sweden.

In the back nine, Kim added three more birdies and hit no bogeys to become the first golfer on the LPGA Tour to go 31 under par at a tournament. During the final round, Kim showed outstanding accuracy with her iron shots, with a Greens in Regulation percentage of 94.4. Over the four rounds, Kim had one eagle, 31 birdies and one double bogey but did not have a single bogey.

Looking at the previous winners of the tournament, the course tends to be easier than other tournaments, as defending champion Katherine Kirk of Australia won with a score of 22 under par in 2017.

Kim was dominant throughout the weekend. Kim started the first round by shooting nine under par, 63, and a 65 in her second round, even with a double bogey on the par-3 17th. Then, by shooting another low round of eight under par, 64, on Saturday, Kim tied the 54-hole score record with Sorenstam at 24 under par.

“It’s an honor to have my name with Annika’s,” Kim was quoted as saying after the third round. “I used to watch Annika on television and it was my dream to play on the LPGA with her.”

Kim tied the 54-hole record but another low round on Sunday allowed Kim to beat her own record and also to surpass Sorenstam’s. In 2016, Kim tied the 72-hole scoring record with Sorenstam at 27 under par. Sorenstam set the record at the 2001 Standard Register PING.

With a win, Kim took home a total prize of $300,000 and became the 61st player on the LPGA Tour history to exceed $5 million in prize money. The victory also allowed Kim to make a big jump on the LPGA Tour’s money ranking for the 2018 season, moving up 19 spots from 31st to 12th.

“I never thought about it when I was young, about the course record,” Kim was quoted as saying on the LPGA website. “But two years ago, [at] JTBC I shot a 27-under; that tied Annika Sorenstam’s record. After that, I wanted to… really wanted the course record. Yeah, I’m very happy that dream came true.”

The 25-year-old golfer made her LPGA Tour debut in 2015 after a successful career on the Korean tour, where she won five events. Kim earned her full time status card on the LPGA Tour after finishing tied for ninth at the 2014 LPGA Qualifying Tournament. During her first season on the LPGA Tour, Kim won three tournaments to earn the Tour’s Rookie of the Year award.

Following a successful first year, Kim notched two additional titles in the 2016 season, and in 2017, she added another win - the Citibanamex Lorena Ochoa Match Play in Mexico City. However, after a win in May 2017, Kim struggled to add another win until Sunday. Prior to Sunday’s tournament, Kim had three top-10 finishes and missed the cut in two of the 14 tournaments she has competed in this season.

Though Kim has earned seven trophies in her four LPGA Tour seasons, she has yet to win a major tournament.

Park Sung-hyun, who won the KPMG Women’s PGA Championship, lost her chance to win two straight tournaments, as she missed the cut by shooting one over par over the first two rounds. Amy Yang was the second best finisher among the Korean golfers, finishing tied for third at 20 under par.

The LPGA Tour continues at the Marathon Classic presented by Owens Corning and O-I from July 12 to 15 at Highland Meadows Golf Club in Sylvania, Ohio.