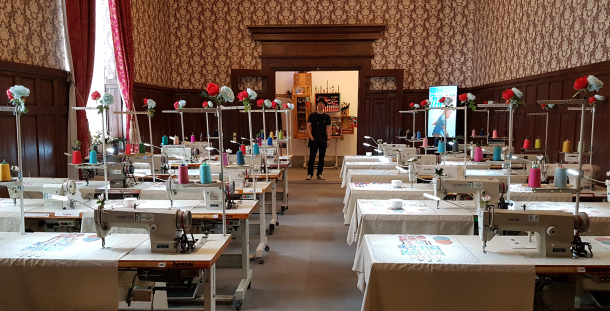 Artist Lee Boo-rok stands in his installation work “Robo Cafe” which includes a re-creation of a factory workroom at the Kaesong Industrial Complex in North Korea. This is part of a contemporary art show entitled “Gaeseong Industrial Complex,” which started on Friday at the Culture Station Seoul 284. Ten teams of South Korean artists present their works about the first-ever joint industrial complex, which started operation in 2004 and was suspended in 2016. [MOON SO-YOUNG]

A room in the Culture Station Seoul 284, an art space in what was once Seoul Station, has turned into a workroom with rows of sewing tables. It is a life-size re-creation of a workroom in the Kaesong Industrial Complex in North Korea by South Korean artist Lee Boo-rok.

This piece is part of a contemporary art show entitled “Gaeseong Industrial Complex,” which started on Friday. Ten teams of South Korean artists, including Lee, present works that show diverse perspective about the first joint industrial complex of the two Koreas which opened in 2004 and was suspended in 2016 amid the ups and downs of inter-Korean relations.

On each sewing table in Lee’s installation work entitled “Robo Cafe,” is a piece of cloth embroidered with various texts such as “Deadline is life, Quality is pride.”

“The text on the sheets are slogans that were hanging in the Complex,” Lee said in a press preview on Friday. “I heard each slogan was made through discussions and agreements between South and North Korean workers. It is interesting that capitalist ideas and socialist propaganda are combined in the slogans.”

“Many South Koreans think the Complex is a place for North Koreans to learn capitalism,” he continued. “But, it can be a place to review capitalism from the socialist perspective, at the same time. And these diverse views are mixed through human contact, conversations and words. That’s important. My work is about that.” 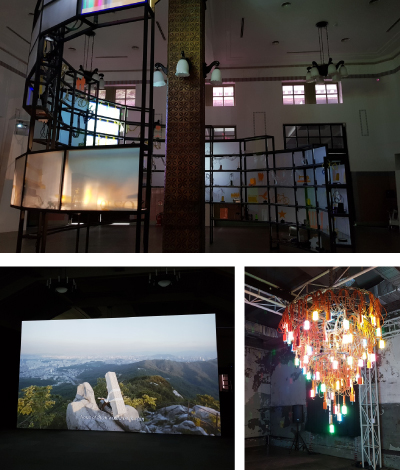 Each sewing table is decorated with flowers. Asked whether they have some symbolic meaning, the artist said, “Oh, North Korean workers in the complex actually decorated their working tables with flowers and other personal objects, as they used the tables for a long time. You know, the complex was operated for more than 10 years.”

This reminds viewers of at least two things; that North Korean workers are not very different from South Koreans in decorating their spaces and the complex has a decade of history of rare personal communication and contact between the people of both Koreas, even if they were limited.

The recognition of this was the origin of the exhibition, said Carey Park, a research professor at Hongik University, who curated the show.

“Surprisingly, we have had little knowledge and interest in what was going on inside the complex - between the people from the two Koreas working there, beyond the complex’s economic effects and political implications,” Park said. “With this exhibition, we want to look into the culture shock that the workers from each side went through, how they collided and reconciled and what new culture they created together.” 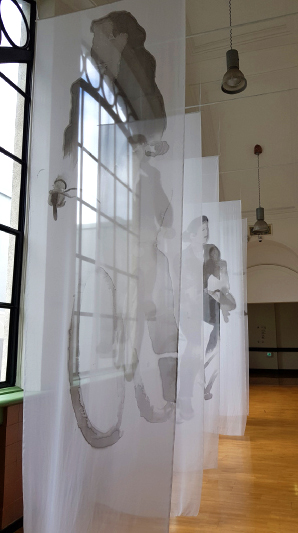 Actually, the conception of the exhibition started during the former Park Geun-hye administration, when inter-Korean relations were frozen and the complex was shut down after a series of North Korean provocations.

“We started to prepare for this show with some fighting spirit,” said Jeong Jeon-yeop, one of the participating artists. “Now that the inter-Korean relations have suddenly improved, our spirit has been cooled a little bit. But we think the exhibit is more important as the 10 years of experience at the complex will be a good reference for the two Koreas in developing relations and solving possible conflicts in the future.”

Jeong presents a group of paintings on translucent white chiffon of North Korean female workers on their way to their workplaces.

The other works include a two-channel film by artist Im Heung-soon, who won the 2015 Silver Lion at the Venice Biennale, about the sense of loss felt by South Korean businessmen after the shutdown of the complex, and a series of photos by artist Yoo Soo of workers from both sides.